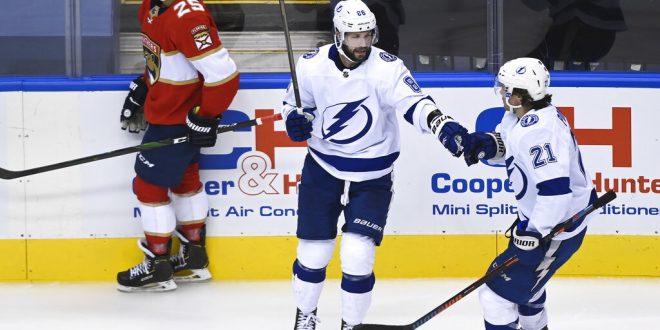 The NHL will make its official return this Saturday. Exhibitions are underway as players prepare, but the games that count begin over the weekend.

The return will start with the beginning of the play-in round. Sixteen of the 24 teams that made it to the NHL hub cities will play in a qualifying round. Those who advance will count as officially making the playoffs, while those who don’t won’t count as having made the playoffs. Teams that lose in the qualifier will enter the draft lottery for a shot at the first-overall pick in the draft.

The other eight teams (the top four in each conference) are guaranteed a trip to the playoffs. They will play in a round-robin starting Sunday to determine seeding for the first round. This set up prevents teams from sitting around during the qualifier.

The brackets will still be conference based but will reshuffle after each round instead of the usual set bracket.

Both the Tampa Bay Lightning and the Florida Panthers return, but have different routes to the Stanley Cup.

Panthers Push for the Playoffs

One of the teams participating in the play-in is the Florida Panthers. With a new head coach commanding the team, the Panthers started off hot this season, being as high as second place in the Atlantic Division back in December. However, the 2020 half of the season was not as good to them, and they slipped to fourth place.

Florida finished the regular season with 78 points in 69 games played. The Panthers will be up against the New York Islanders for the play-in.

The Panthers by far have an offensive advantage. They were sixth in goals in the regular season. Five Panthers players had 20 goals this season, and that number would’ve been much higher if there had been 82 games. The Islanders lack depth on offense with Jean-Gabriel Pageau and Brock Nelson carrying much of the weight.

However, from a goaltending and defensive standpoint, the Islanders have a big advantage. Panthers goalie Sergei Bobrovsky struggled much of the year with a 3.32 GAA and a .900 save percentage. Meanwhile, the Islanders’ two-goalie system (instead of primarily using one) has been very effective. Both Semyon Varlamov and Thomas Greiss have lower GAA’s than Bobrovsky (2.62 and 2.74). They have significantly better save percentages as well (.914 and.913). These numbers are not exactly elite, but they are those of reliable goaltenders.

The Islanders better defend when short-handed, but the Panthers are more successful on the power play. Former NHL player and ESPN analyst Barry Melrose said while on the Sportscene that the Panthers have a quality team with the potential to make a run.

However, he thinks the Islanders are better built for a five-game play-in.

Lightning Look to the Strike

The Lightning’s path to the playoffs has been the opposite of the Panthers. They had a very slow start to the season and were as low as sixth place in the Atlantic in December. However, the Bolts turned it around and jumped to second place.

Much of this was due to the reemergence of goalie Andrei Vasilveskiy. Vasilevskiy struggled through much of the 2019 half of the season but turned into a brick wall after that. Vasy didn’t lose a game in regulation from Dec. 17 to Feb. 20, or 21 straight games. There were only two OT losses during that time. This performance escalated Vasilevskiy back into Vezina talks and is a finalist for the trophy this year.

The Bolts qualified for the playoffs automatically and will play in the round robin. They’ll be matched up with the Boston Bruins, the Washington Capitals and the Philadelphia Flyers. The Lightning have the best head-to-head record against their opponents at 5-3-1. That being said, two of those losses and the OT loss were against the Capitals.

To succeed the round robin, the Bolts either need to overcome Washington or hope they can continue their success against Boston and Philadelphia.

Melrose said whoever is the readiest will do the best in the round robin.

The Bolts’ 4-0 win over the Panthers on Wednesday could give some hope for their fans that they could be that team.

Harrison is a sports coordinator at ESPN 98.1 FM/850 AM WRUF. He served as a beat writer for Florida Gators football for the 2019 and 2020 seasons. He also contributes to WRUF's Gainesville Sports Center segments and makes appearances on the Clash on Harp on Sports. Harrison has been a content writer for WRUF since January 2019 as well.
@HarrisonSmaj
Previous Rays fall short in the Braves’ home opener
Next SEC Going With 10-Game Conference-Only Schedule