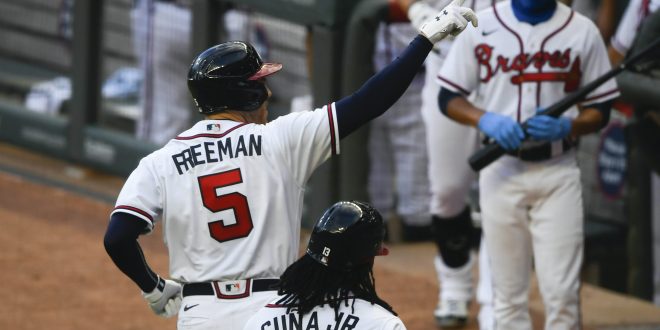 The Rays are looking like one of the teams to beat in this unique season. They had won four consecutive games before a loss in Atlanta last night. Tampa Bay sent their Opening day starter, Charlie Morton to the hill, while the Braves sent Mike Soroka.

The Braves put up two runs in the third against Morton. Freddie Freeman, who not too long ago was debating playing this year, homered and collected three runs last night. Freddie came into this season with only about a week to prepare after testing positive for the virus. The 30-year-old led the way in Atlanta’s home opener.

On the Rays’ side, they have been dominating at the plate in the first few games of the season. Down 2-0 in the top of 5th, Willy Adames crossed home plate following a wild pitch from Soroka to make it 2-1. The next inning, the three-time Gold Glove winner Kevin Kiermaier drove in a run off a single to center field to tie it 2-2. Hunter Renfroe followed suit, driving in two runs to make it 4-2 Rays. Atlanta answered back in the bottom of the sixth with three runs to give themselves a 5-4 lead. The following inning, the Braves scored another two runs, ultimately winning 7-4.

The Rays came into their first road trip hot, on a four-game winning streak. While they showed up at the plate, defensive misreads and an inconsistent bullpen ultimately made the difference. Morton pitched only five innings allowing six hits and two runs. The bullpen, which has been dominant this season, was unable to stop the Braves from putting the ball in play. Entering into last night’s game, Rays’ relievers have only given up eight runs in 26 2/3 innings. Manager Kevin Cash put in Andrew Kittridge, who gave up two consecutive doubles to former Ray Travis d’Arnuad and Dansby Swanson. Freddie Freeman wrecked Tampa Bay’s pitching last night, tallying four hits.

“The Braves put together some really good at-bats, and that was kind of the answer they needed to try and win the game, and they did just that,” Rays CF Kiermaier said.

Along with that, a few defensive misreads also played a role in the Rays’ demise. Three-time Gold Glove Award-winning center fielder Kiermaier is known for his ability to make impossible grabs and rob hitters of homers. Last night, he misread a hit to center off the bat of Johan Carmargo. While this was out of character for Kiermiaer, his reputation in the outfield held Carmargo to a double with no runs scored.

The Rays can still win the season series against Atlanta. Ryan Yarbrough makes his second start of the season for the Rays, while Fried takes the hill for the Braves sporting a 3.60 ERA. First pitch is set for 7:10 p.m.