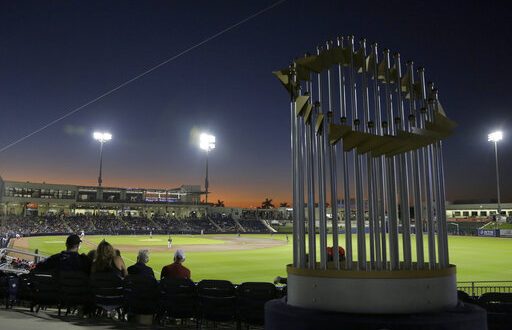 FILE - In this Feb. 27, 2020, file photo, a replica of the World Series trophy is seen in the stands as the Washington Nationals play the Houston Astros during a spring training baseball game Thursday, Feb. 27, 2020, in West Palm Beach, Fla. Major League Baseball has proposed expanding the playoff field from 10 teams to as many as 16 for this year and next season. Other major sports are accustomed to more teams in the postseason. (AP Photo/Jeff Roberson, File)

The NBA and NHL both adopted a bubble-like format for resuming its seasons amid the coronavirus pandemic. And so far, it’s been a success. There have been no positive COVID-19 cases in the NBA for roughly three weeks. The same goes for the NHL after two weeks.

Now, there are reports stating that MLB is looking at possibly creating its own bubble for the postseason.

Bubble ball? MLB considers creating one for the playoffs and World Series https://t.co/IGhbCBhxqy

How it Could Work

According to ESPN’s Jeff Passan, the idea of creating a bubble for the postseason comes after the latest coronavirus outbreaks that have occurred within the Miami and St. Louis organizations.

In terms of how it would look, the league is reportedly looking at a setup that would follow nearly the same structure as the NHL’s bubble. While the NHL decided on two hub cities for its return, MLB could need three to complete its wild-card round.

This is in large part because of the league’s 16-team expansion for the playoffs. Reports say that after the wild-card games are completed, MLB could shrink the hub cities down to two for the division series.

Furthermore, there is also the chance of the wild-card games still being completed at home stadiums. In this scenario, the bubble format starts for the division series.

While the structure of how the bubble will work is one thing for the league to figure out, it must also find locations for all the games to be played at. Three areas are already being considered as likely landing spots.

Because of the number of stadiums: Southern California, Chicago and the New York could all possibly host games.

There is still much to sort out with this potential plan. But, obviously, one of the biggest reasons the league is looking into this kind of bubble-like format is to limit the amount of areas teams would have to travel to.

Additionally, keeping organizations in one designated area could also help keep the number of positive tests down.