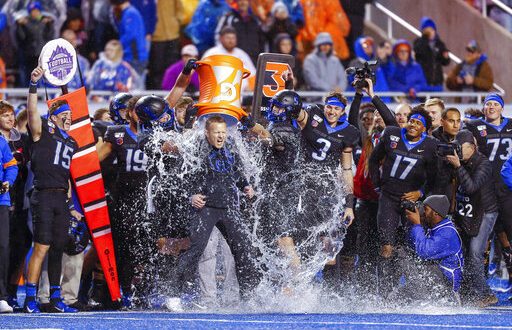 On Saturday, the Mid-American Conference became the first FBS conference to deliver the stunning news. It was going to postpone its fall sports season due to concerns over COVID-19.

Not even three days after this announcement, a second conference has come out and said it will also delay its fall sports calendar as well. The Mountain West delivered the news on Monday, citing ongoing challenges with the coronavirus as one of the main reasons for its decision.

JUST IN: The Mountain West Conference has postponed all fall sports; including football. League will attempt to play in the spring:https://t.co/2gWXyCtQor pic.twitter.com/WlavoTHigf

What Does This Mean for the Conference?

Along with the continuing struggles of COVID-19, the safety of student-athletes and the campus communities as a whole were also key factors in the Mountain West’s choice to postpone fall sports.

With no athletic competition taking place, this means sports like men’s and women’s cross country, women’s soccer, football and women’s volleyball will all be on hold for the time being.

The conference said it will look at all possibilities as it relates to rescheduling fall sports. One of the options, which has been discussed by some commissioners and conferences already, is playing during the spring.

Obviously, getting the news that the fall sports season will be delayed is not something the players, coaches and athletic directors of schools within the Mountain West wanted to hear. While it is a devastating blow, most of the reactions that came in from some of the ADs and coaches on social media were understanding of the conference’s decision.

A statement from our Director of Athletics, Terry Tumey pic.twitter.com/yaC21FEOFw

The @MountainWest made its announcement about the postponement of fall sports, impacting @HawaiiFootball. Hear from President David Lassner, Director of Athletics @DavidAKMatlin, and head coach @RealCoachGraham about today's news. pic.twitter.com/kEQZP286tj

With two FBS conferences already making the move to delay fall sports, it will be interesting to see how many more begin to follow suit. These next couple of days should provide some answers to a lot of the questions fans and media members have been anxiously waiting to hear.