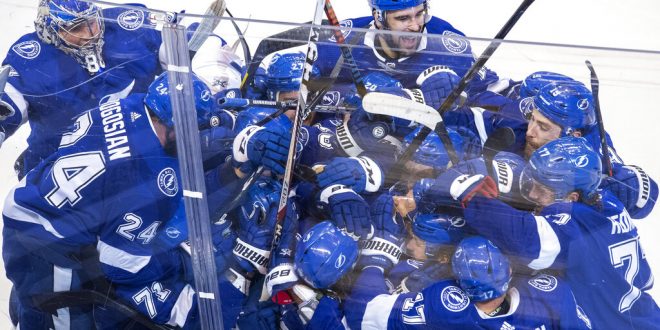 That “finally” in the headline means two things. The first meaning relates to the 483-day wait the Tampa Bay Lightning had before getting this chance. Last year, they left the playoffs in historic, embarrassing fashion. Their post-defeat tweets didn’t help.

We don’t have any words and we know you don’t want to hear them.

We understand your anger, your frustration, your sadness. Everything you’re feeling – we get it.

This isn’t the ending we imagined, and certainly not the one we wanted. Thank you for being there the entire way.

As a matter of fact, all it became was joke material for the internet a year later.

We don’t have any words and we know you don’t want to hear them.

We understand your anger, your frustration, your sadness. Everything you’re feeling – we get it.

This isn’t the start time we imagined, and certainly not the one we wanted. Thank you for being there the entire way

The Bolts were up against the Columbus Blue Jackets in the first round for the second-consecutive year. The first time, the President’s Trophy-winner Lightning were swept out. They could not let it happen again. The mission began Tuesday when puck drop came at 3 p.m. for game one.

Early in the first period, Bolts forward Alex Killorn got a tripping penalty to give Columbus the first power play of the series. At this point, the Blue Jackets hadn’t scored a power-play goal in the bubble. However, that changed when Pierre-Luc Dubois got a shot past the glove of Bolts goalie Andrei Vasilevskiy to make it 1-0 Blue Jackets.

Immediately, that gut feeling of “this might happen again” starts to show up.

However, less than four minutes later, Brayden Point pokes the puck through a crowded net to tie the game 1-1. The tie would hold until seconds left in the second period. Again, Columbus instilled that unwanted gut feeling. Oliver Bjorkstrand took a shot all the way from the boards from the right of the net to get the puck over the left shoulder of Vasilevskiy to give the Blue Jackets the lead again at 2-1.

The Bolts responded quickly to start the third period. Twenty-three seconds in, Yanni Gourde snuck the puck past goalie Joonas Korpisalo to tie the game again. It was an odd goal. It appeared Korpisalo stopped the puck before inevitably kicking the puck back into the net. This goal was scored at around 5:04 p.m. eastern time. It would be a while before we saw another one.

Here’s Where that Second Meaning of “Finally” Comes In

The first overtime period came and went. Then, the second did. Then, the third and the fourth. The game entered quintuple overtime just after 9 p.m. The game went on for so long, they had to push the Hurricanes-Bruins game that was supposed to be played at 8 p.m. back to 11 a.m. Wednesday.

Whoever is in charge of working the jumbotron in the bubble decided to have some fun during the long overtime, and we are all thankful for it.

They took full advantage of the fact that a game this long doesn’t happen very often.

Here’s one that spoke for everyone watching the game.

As the game went on, the goalies continued to gain an advantage. The skaters were getting tired, and it was harder to get a quality shot on net. The most notable performance of the two goalies without a doubt goes to Joonas Korpisalo. Korpisalo saved 85 shots over the course of the night. This set the record for most saves in a game ever. However, he saved 85 of 88 shots.

Halfway through the eighth period of the night, Braydon Point fired a shot past Korpisalo to win the game for the Tampa Bay Lightning.

It was over. The Bolts won the fourth-longest game in Stanley Cup playoff history, and they finally won a playoff game against Columbus.

Most still say the only true redemption is winning the Stanley Cup. That is definitely still true. But they did something Tuesday night that they failed to in 2019: get that first win.

The Three Stars of the Game:

The Lightning will be back for Game 2 Thursday at 3 p.m. It might be for the best that an earlier time was picked again.

Harrison is a sports coordinator at ESPN 98.1 FM/850 AM WRUF. He served as a beat writer for Florida Gators football for the 2019 and 2020 seasons. He also contributes to WRUF's Gainesville Sports Center segments and makes appearances on the Clash on Harp on Sports. Harrison has been a content writer for WRUF since January 2019 as well.
@HarrisonSmaj
Previous Orlando City on the hunt for first trophy
Next Orlando Magic Drops Fifth-Straight Game