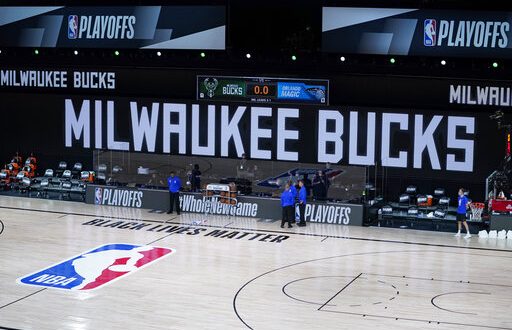 Officials stand beside an empty court at the scheduled start of an NBA basketball first round playoff game between the Milwaukee Bucks and the Orlando Magic, Wednesday, Aug. 26, 2020, in Lake Buena Vista, Fla. The Milwaukee Bucks didn't take the floor in protest against racial injustice and the shooting of Jacob Blake, a Black man, by police in Kenosha, Wisconsin. (AP Photo/Ashley Landis, Pool)

The Milwaukee Bucks players began a boycott on Wednesday that reached the WNBA, MLS, Major League Baseball and the rest of the NBA.

Background on the boycott

Players and coaches all across the NBA were hurt by the way the shooting of Jacob Blake was handled, and they felt like they had to do something more.

Also, the Bucks players felt even more pressure to do something since the shooting happened in Wisconsin.

Minutes before the start of the game, Bucks players came together and decided to not play Game 5 against the Magic in the NBA playoffs.

Players reasons for the boycott

However, it wasn’t just the NBA boycotting games on Wednesday.  The WNBA also came together and boycotted all of the games scheduled.

Elizabeth Williams of the Atlanta dream spoke about the WNBA’s decision.

Also, MLB players boycotted some games Wednesday night. The players wanted to show support to the other leagues boycotting and to continue to demand change.

The Milwaukee Brewers players boycotted their game against the Cincinnati Reds and a total of four games were boycotted.

Milwaukee’s Christian Yelich spoke about how the Brewers felt.

The NBA and its players and currently discussing what they can do to create tangible change in the community. They’re also talking about how to resume the playoffs, and if they should even do so.

Many players think that the best way to continue the fight for change is to play. However, other players think the best thing to do is go home because some things are more important than basketball.

ESPN’s Malika Andrews talked about what the players have gone through, and what their plans could be in the future.

As for the games on Thursday, there were three games scheduled and none were played.