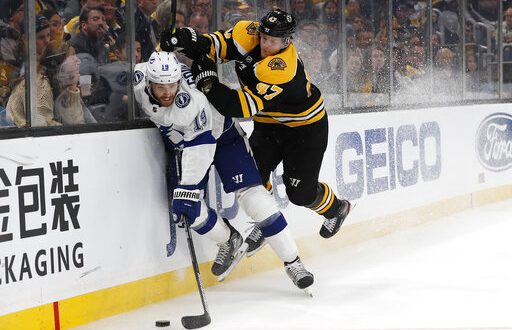 Lightning Blow Out Bruins in Game 3 of NHL Playoffs

The Tampa Bay Lightning blew out the Boston Bruins 7-1 to take a 2-1 series lead in the National Hockey League’s Eastern Conference semi-final series.

Lightning get off to a quick start

Lightning light it up in the 2nd

Tampa Bay was up 2-0 after the first period, but it turns out the scoring was just getting started.  They put up four goals in the second period; two of them being power-play goals.

First, Mikhail Sergachev got a power-play goal to make it 3-0 and then Alex Killorn scored on another Lightning power play.

Killorn scored again later in the second period and he finished with two goals on the night.

Finally, Brayden Point scored his sixth goal of the postseason in the second period as Tampa Bay outscored Boston 4-1 in the period.

Lightning power play was the difference

The Bruins spent 39 of the 60 minutes of the game defending a Lightning power play.  Tampa Bay did give up one power-play goal to Boston. However, they only had 13 penalty minutes.

It was a huge advantage for Tampa Bay, so if Boston wants to win Game 4 they will need to even out the penalty minutes.

Up next in the series

The Lightning will have a chance to take a commanding 3-1 series lead, while the Bruins will try to tie the series up at 2.

The winner of this series will take on the winner of the other Eastern Conference semi-final being played in Toronto.  Currently, the Philadelphia Flyers and New York Islanders are tied 1-1 in their series. 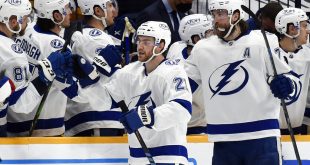 The NHL trade deadline has come and gone this week and, with it, several of …