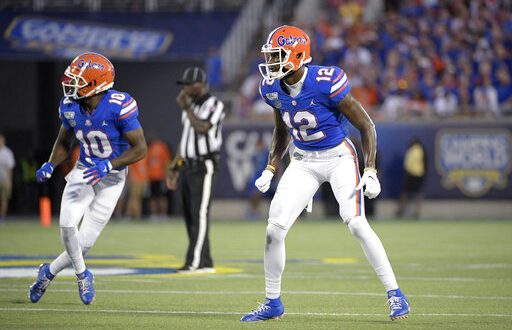 The NFL season is just around the corner, which means fantasy football players are also gearing up for their fantasy drafts. With 52 former Florida Gators currently on an active NFL roster, there are a handful of Gators alumni who could find a way to make fantasy rosters this season.

While most of the league’s Gators are on defense, here are five players who could warrant a roster spot at some point this fantasy season.

A recent second-round selection, Jefferson has been the highest Gator to be picked in fantasy drafts. According to FantasyPros’ Average Draft Position tool, Jefferson is typically being the 102nd wide receiver drafted.

That’s not a high slot, but Jefferson possesses enough upside to be worth a stash in deep leagues or Dynasty leagues. Despite joining a loaded receiving group in Los Angeles, the 24-year-old receiver has reportedly made waves in Rams’ training camp.

That includes this impressive catch on the sideline.

He may not see much action early, but Jefferson could push for significant playing time as the Rams’ WR3. For a team that threw the third-most passes in the NFL last season, expect Jefferson to see plenty of opportunities to make a fantasy impact. Until then, however, he’s only worth a late bench spot.

When the Jets spent a fourth-round pick on Perine, the team still had star running back Le’Veon Bell. Now, the team has Bell, Perine and veteran Frank Gore. It’s a crowded room for the rookie to make a dent in fantasy. However, Perine may have to wait a little longer for his debut.

Perine was carted off the practice field Sunday after suffering an ankle injury.

The #Jets are doing an MRI on impressive rookie RB La'Mical Perine, who injured his ankle at the scrimmage today. The early word is just a sprain, but the tests will show all.

As of now, Perine is going undrafted in fantasy drafts. FantasyPros doesn’t have him listed in their top 90 running back prospects, either.

Reed signed with the 49ers this offseason after not playing in 2019. He’s no threat to incumbent starter George Kittle — who signed a five-year, $75-million extension earlier in August. So far, Reed has reportedly had an alright training camp in San Francisco, which earned him praise from his new coach, Kyle Shanahan.

Jordan Reed on Friday had the most work he’s gotten on the #49ers practice field. “He made some good plays – some obvious ones you guys saw and missed a couple, also,” Kyle Shanahan said. Here are some clips of Reed (No. 81).https://t.co/YL3YcqDV3s pic.twitter.com/nsWj5czBmr

Ourlads.com lists Reed as the starting tight end opposite Kittle, so Reed could potentially see some valuable playing time. However, his inexperience with the team and his extensive injury history limit any fantasy value Reed may have. He did not make FantasyPros’ list of top 38 tight ends for fantasy football.

The Colts typically had just one tight end on the field in 2019, per NFL.com’s Michael Fabiano. That does not bode well for Burton, who joined Indianapolis after two seasons in Chicago. On top of that, Burton is questionable to suit up for Week One due to an injury.

If Burton is healthy for the start of the season, he still would have to compete with incumbent starter Jack Doyle. Luckily for Burton, the Colts threw to their tight ends 141 times in 2019, the fifth-highest rate in the NFL. FantasyPros currently ranks Burton as the 38th-best tight end in fantasy football.

Kickers may not be the most popular option in fantasy football, but Piñeiro is still worth mentioning. In 16 games last season, he averaged 6.1 points, which was only the 32nd-most in fantasy last year. Piñeiro isn’t a good weekly option; however, he did have three games with double-digit fantasy points.

This makes Piñeiro a reasonable streaming option. Streaming is the strategy of using a new kicker each week based on that week’s matchups. For a player like Piñeiro, that may be the only way he becomes fantasy relevant.

Unfortunately for Piñeiro, he may not even see the field due to a lingering groin injury.

It was a good day for K Cairo Santos, who made every attempt. With Eddy Pineiro still sidelined with a groin injury, chances have to be increasing that Santos could be the man in Week 1. We haven't seen Eddy kick in quite some time.

FantasyPros lists him as the 32nd-best fantasy football kicker. As with every other Gator on the list — excluding Van Jefferson — Piñeiro might not see much fantasy action in 2020.