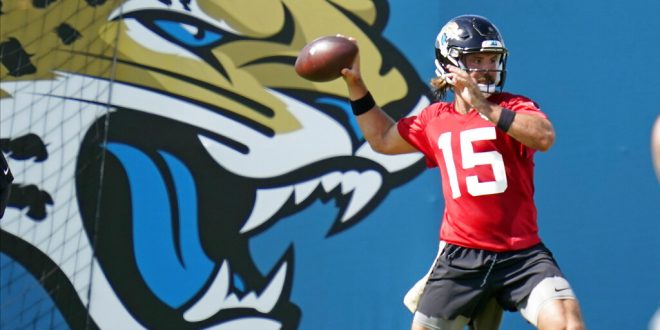 Jacksonville Jaguars quarterback Gardner Minshew II (15) throws a pass during an NFL football workout, Thursday, Aug. 13, 2020, in Jacksonville, Fla. Ben McAdoo (Giants) is Jacksonville’s new quarterback's coach and Jay Gruden (Washington) is the team’s offensive coordinator. Together, they have been tasked with helping Minshew and one of the league’s youngest offenses take huge strides after missing months of on-field work during the offseason because of the coronavirus pandemic. (AP Photo/John Raoux)

The moment is finally here for Jaguar fans across the nation. For the first time since the Coronavirus pandemic, fans will be able to enjoy their Sundays in a new light. This weekend the Jacksonville Jaguars are set to start off their 2020 season.

What to look forward to

The Jacksonville Jaguars and Head Coach Doug Marrone are ready to kick things back into action.

“To be here in week 1 getting ourselves ready to go and feeling obviously confident that we will be able to play is really an amazing thing.” -Coach Marrone

Last year, the Jaguars finished 4th in the AFC South with 6 wins and 10 losses.

This Sunday, September 13th, the Jaguars will be taking on the Indianapolis Colts and their new quarterback Phillip Rivers in week 1. The Jaguars are currently ranked 32 in ESPN’s football power index. Last December the Jaguars secured a victory over the Colts in a 20-38 point game match up.

The Jaguars will be seeing the Colts multiple times this season along with the AFC South rivalry pack- The Tennessee Titans and The Houston Texans.

Alongside these three teams- Jaguar fans can tap into other opponent games following week 1 including the Cleveland Browns, Pittsburgh Steelers and Green Bay Packers.

With no preseason games this year and only 53 players listed on the roster, only time will tell how this season will pan out for Jacksonville.

Jacksonville saw several changes to their roster during this year’s offseason including the addition of new offensive coordinator- Jay Gruden.

Additionally, Jacksonville shocked fans when they traded Nick Foles to the Chicago Bears in exchange for the fourth-round selection in this year’s draft. This now gives 2019 round 6 Draft pick, Gardner Minshew, the opening positions for this season.

The jaguars also picked up on free agents Rodney Gunter and Al Woods. Both looking to make an impact defensively as they were both chosen in this year’s 53 player roster. Alongside them- all 12 of this years 2020 NFL draft class including Round 1 pick and former Gator-  CJ Henderson.

Coach Marrone says he has confidence in communication with this team thanks to the new 53 player roaster.

Sound for this story Courtesy of the Jacksonville Jaguars: