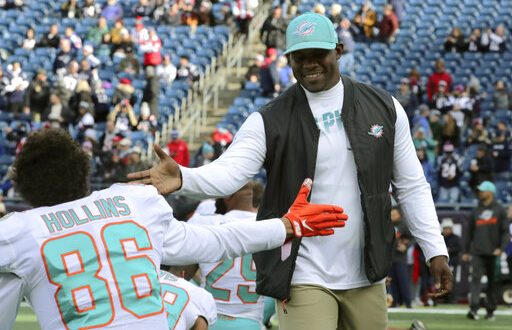 The Miami Dolphins will be back in aqua and orange to kickoff the 2020 NFL season Sunday in a division matchup against the rival New England Patriots. The Dolphins open the season traveling to New England for a 1 p.m. kickoff at Gillette Stadium.

The Dolphins and second-year Head Coach Brian Flores will look to start their season where they left off seeking a second consecutive win over the Patriots after finishing last season with a 27-24 win against New England in Week 17.

The Dolphins finished last season with a 5-11 record and a last-place finish in the AFC East division. The team started the year 0-7 before making improvements to finish 5-4 in their final nine games.

Even Bill Belichick, head coach of the New England Patriots and Flores’s former boss, said that the team should be “a lot better” in year two with the roster overhauls and coaching staff changes Flores has made.

The Dolphins named league veteran Ryan Fitzpatrick as the starting quarterback Monday. Fitzpatrick, 37, and in his 16th NFL season, is returning for his second season with the Dolphins.

The Patriots team that the Dolphins will line up against Sunday will look different than the squad the Dolphins have seen in years past. The most notable change being the departure of franchise quarterback Tom Brady to the Tampa Bay Buccaneers.

The Patriots additionally sport a league-high eight players who have opted out due to Covid-19. This includes defensive stalwarts in linebacker Dont’a Hightower and safety Patrick Chung.

The Patriots' list of opt outs grows as Patrick Chung reportedly will not be playing in the 2020 season:https://t.co/FtTkIsB1sS pic.twitter.com/brBoOMa3l1

The Dolphins will have to prepare for a new offensive strategy with new quarterback Cam Newton under center. Newton brings a mobile dynamic to the quarterback position that patriots lacked with Tom Brady.

BREAKING NEWS: The@MiamiDolphins players will stay inside for both national anthems. They express their discontentment with what they call “fluff and empty gestures” by the @NFL pic.twitter.com/ghUktHhPt9

The Dolphins announced on Thursday evening that the team would stay inside for both National Anthems to be played Sunday.