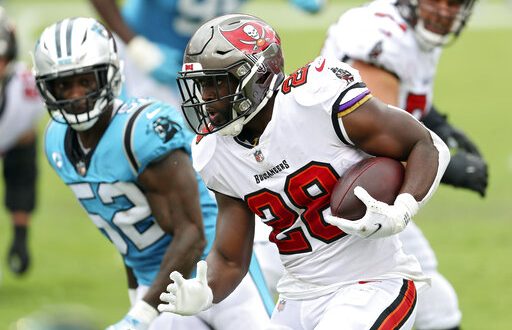 Fournette leads the Bucs to victory against Carolina

Tom Brady gets his first win as with Tampa Bay as the Buccaneers defeated the Carolina Panthers 31-17.

Bucs start fast but have to hold on late

Tampa Bay jumped out to an early 21-0 lead. From there, it looked as if the rout was on, but Carolina battled back to make it a 21-14 game early in the 4th quarter.

It was 24-17 when the Bucs got the ball back late in the 4th quarter looking to ice the game. Leonard Fournette got the carry and scored from 46 yards out to put the game out of reach with 1:48 left.

After some struggles last week, Tom Brady put together a solid game. Brady went 23/35 for 217 yards with one touchdown and one interception. Leonard Fournette also had his best game of the season so far. He carried the ball 12 times for 103 yards and scored two touchdowns.

Also, Mike Evans had a big game. He caught seven passes for 104 yards and caught a touchdown.

Up next for Tampa Bay

The Buccaneers with travel to Denver next Sunday to take on the Broncos. The Broncos will be without starting quarterback Drew Lock for this game. According to Adam Schefter, Lock sprained his AC joint and will miss 2-6 weeks.

Former Gator Jeff Driskel came in relief of Lock. Driskel threw two touchdown passes and one interception in the Broncos loss to the Pittsburgh Steelers on Sunday. He will more than likely be the starter when the Bucs play the Broncos next week.