Home / Jacksonville Jaguars / Jaguars lose a close one in Tennessee 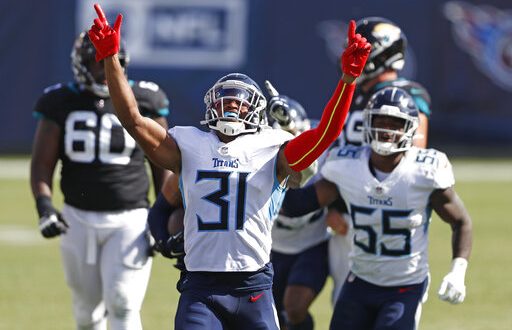 Jaguars lose a close one in Tennessee

The Jacksonville Jaguars came up short Sunday against the Tennessee Titans. Ryan Tannehill led a game-winning field goal drive that gave the Titans the 33-30 win.

Jaguars quarterback Gardner Minshew had another big game. He was 30 for 45 with 339 passing yards and three touchdowns. However, Minshew threw two costly interceptions on Sunday. One led to a Titans touchdown, and the other pretty much ended the game.

The Jaguars couldn’t stop Ryan Tannehill on Sunday afternoon. Tannehill was 18 for 24 with 239 passing yards, and he also passed for four touchdowns. Tannehill didn’t turn the ball over, and his QBR was 90.2.

It was pretty much all Ryan Tannehill doing damage to the Jaguars defense as Jacksonville was able to limit Derek Henry to 84 yards on 25 carries.

Robinson running well for the Jaguars

Another bright spot Sunday was rookie running back James Robinson rushing for over 100 yards. The rookie out of Illinois State was the leading rusher for the Jags on Sunday and has set a franchise record for most rushing yards by a player in the first two games of his career.

Robinson ran for 102 yards and scored a touchdown.

Up next for the Jaguars

The Jags are currently second in the AFC South, and their next game will be against the Miami Dolphins on Thursday night. Jacksonville comes into the game 1-1, while the Dolphins are 0-2.

Miami also lost a close one yesterday against the Bills at home. The Dolphins lost 31-28 to the Bills and will be looking to get their first win of the season, while the Jaguars will hope to move to 2-1.

@AnschultzChase
Previous Allen sets career highs in passing, Bills down Dolphins 31-28
Next Fournette leads the Bucs to victory against Carolina