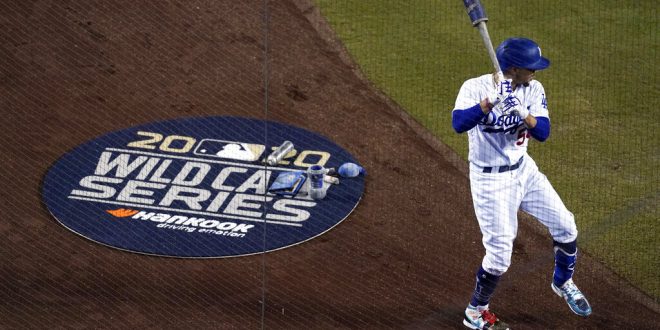 Los Angeles Dodgers' Mookie Betts warms up near the on-deck circle during the first inning in Game 1 of the team's National League wild-card baseball series against the Milwaukee Brewers on Wednesday, Sept. 30, 2020, in Los Angeles. (AP Photo/Ashley Landis)

In the MLB Wild Card, three teams advanced to the divisional series on Wednesday. There are 10 other teams still fighting for their spots Thursday.

The Houston Astros were the first to move on to the ALDS after defeating the Minnesota Twins in two games. The Twins continue their streak of losses in the postseason as they have not had a win since 2004.

Top-seeded Tampa Bay took down the Toronto Blue Jays in two games as well. The Rays will head to San Diego on Monday to face another divisional opponent in the New York Yankees. Speaking of the Yankees as you might have guessed they also advanced with a thrilling win sweeping the Cleveland Indians.

New York struggled quickly started down 4-0 in the first inning. Then a solo shot from Stanton and a grand slam off the bat of Gio Urshela gave New York the lead 5-4. From there it was a back and forth nail-biter until the top of the ninth when DJ Lemahieu grounded a single up the middle sealing the 10-9 victory for his team. Yankees manager Aaron Boone said the game was a lot of fun to be a part of

While three teams moved on there are still 10 teams that are fighting to get their spot in the divisional series. On Wednesday, the Dodgers and Braves won their first games like expected, however, there were a few upsets. Miami stole a game from the Cubs winning 5-1.

It was a scoreless game up until the fifth inning when Chicago grabbed a single run for the lead. Cubs’ pitcher, Kyle Hendricks,  pitched well but finally broke in the seventh.

Miami’s Corey Dickerson and Jesus Aguilar hit a three-run shot and a two-run shot into the seats of Wrigley Field. The Marlins are still undefeated in the playoffs as a franchise. Sixto Sanchez takes the mound for them on Thursday against Chicago’s Yu Darvish for a chance at moving forward.

The Cardinals also upset the San Diego Padres who ended with the second-best record in the National League. Also, the Athletics produced the first series to go three games tying the series with a 5-3 win against the White Sox. Game 3 is scheduled for Thursday at 3.

One of the most anticipated pitching match-ups in the playoffs did not disappoint. Most baseball fans wanted to see a Shane Bieber and Gerrit Cole tug-of-war but, New York put up 7 runs on Bieber Tuesday.

The Max Fried and Trevor Bauer dual, on the other hand, turned out to be the complete opposite. Fried ended his day with seven innings pitched and no runs allowed on six hits. Bauer also did not let up any runs while going seven and two-thirds innings and striking out 12 batters.

The game remained scoreless for 12.5 innings. Braves’ Freddie Freeman ended the game with a walk-off single to bring home the winning run in the bottom of the 13th.