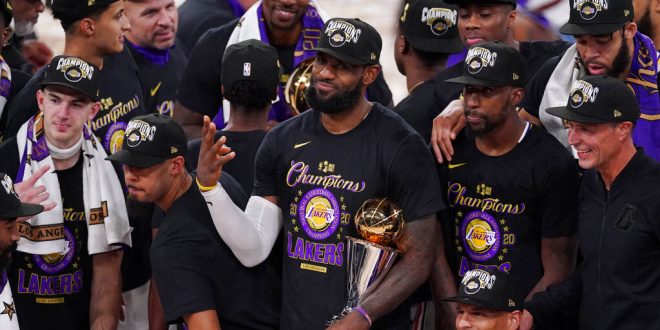 LeBron James’ triple-double in Game 6 closed the door on the Miami Heat, and send everyone home from the bubble in Disney World. It’s the Lakers 17th championship in franchise history and the Lakers first since 2010.

LeBron gets his 4th ring

James won his fourth championship on his third team. He started with winning two for the Miami Heat, and then went back home to Cleveland to win one. Now, James’ fourth title comes as a member of the Los Angeles Lakers.

Also, James earned his fourth career NBA Finals MVP award. He averaged 25.3 points with 7.8 rebounds and 10.2 assists in the series.

Anthony Davis added 19 points and 15 rebounds for the Lakers.

He promised. He delivered. Your NBA Finals MVP: @KingJames pic.twitter.com/QbVJ6o3jGq

It’s safe to say the five seeded Miami Heat emptied the gas tank in this series. In the two Heat wins this series, Jimmy Butler recorded a triple-double.

In Game 6, Bam Adebayo led the way for the Heat with 25 points and 10 rebounds. However, the Heat were down 28 at halftime, and were never able to get back in the game. A big 4th quarter from the Heat made the score a respectable 106-93 loss.

The Lakers began their journey to the championship in Buena Vista, Fla. on July 30, and the Heat started a day later.

22 NBA teams entered the bubble. After nearly a three and a half month stay in Disney World, and zero positive COVID-19 tests, the Lakers exit champions.

James spoke about the success of the bubble this season.

Miami Heat head coach Erik Spoelstra also talked about how grateful he and the team were to be in the bubble.