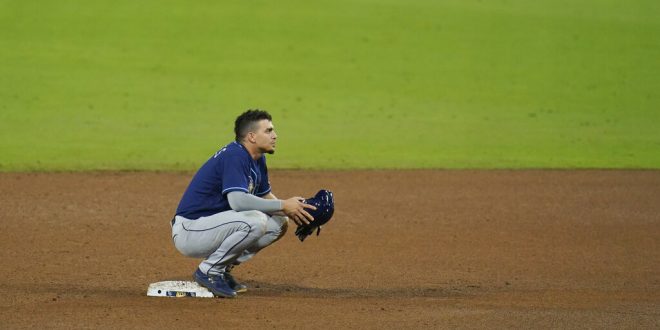 Tampa Bay Rays' Willy Adames sits at second after an RBI double against the Houston Astros in the ninth inning in Game 4 of a baseball American League Championship Series, Wednesday, Oct. 14, 2020, in San Diego. The Astros defeated the Rays 4-3 and the Rays lead the series 3-1 games. (AP Photo/Gregory Bull)

The Tampa Bay Rays had the opportunity to lock up a trip to the World Series last night, but merger offense got the best of them again. For the Houston Astros, it was win or go home, and they pulled through just at the right time.

The Astros forced a Game Five in the NLCS after bringing down the Rays 4-3. The Rays had the opportunity to sweep the Astros in the best of seven series, but couldn’t pull through. However, Tampa Bay is still in control of the series at 3-1, and still only needs one more win to advance.

To Game 5 we go pic.twitter.com/ESkQwInT3l

Even in a must-win situation, George Springer says that the message before the game was to just go out and play.

Houston was slow but steady Wednesday night after coming off three straight losses. Jose Altuve got the early 1-0 lead for the Astros with a one-run homer in the bottom of the first.

It would be Altuve again in the bottom of the third when he drove in the second run of the night. His double brought home Martin Maldonado who had reached on a walk two batters before.

Tampa Bay tied it up at 4 in the next inning after a Randy Arozarena two-run homer, but couldn’t get anything else to connect. However, Springer hit a two-run homer of his own in the bottom of the fifth to give the Astros back the 4-2 lead.

In the bottom of the ninth, the Rays began their rally after Willy Adames hit a two-out double after Joey Wendle reached on a fielder’s choice. It would not be enough for the Rays though and they would have to prepare for a Game Five.

Tampa Bay’s bats have been missing pretty much all season. In the regular season, the team batted just .238 to rank 21st in the majors and is now only hitting .209 in the postseason. This average is the worst of the four remaining teams.

However, one batter has been consistent for the Rays over the postseason. The playoffs have been the time for Arozarena to shine, and his home run Wednesday night gives him five during the postseason.  That home run tied him for second in most home runs in a single postseason among rookies.

Arozarena then missed the first 34 games of the regular season after catching COVID-19. He then took time to rebuild his strength. In the postseason he has 19 hits, which is already one more hit than he had the entire regular season. His 19 hits are the fourth-most by a rookie in a single postseason.

In the past, different teammates took turns stepping up to help out Arozarena on offense, but nobody answered the call last night.

The Rays will have another opportunity to lock it up tonight. Should they win, this would be the franchise’s second pennant. However, if the Astros forge the comeback, they will be just the second team in MLB history to come back from down 0-3 and win a playoff series.