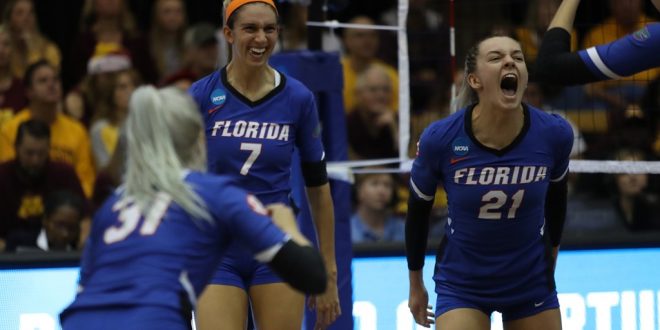 Photo By: Kelly Chase. Scenes from the Gators' game against Minnesota in NCAA Super Regionals on December 13, 2019, in Austin, Tex.

The Florida Gators Volleyball team opened their season this week on a high note. The Gators concluded a two-match series with the Auburn Tigers Thursday night with a complete sweep. Both Wednesday and Thursday’s wins were taken in just three-straight sets each.

Thursday’s match against the Tigers started off hot with Lauren Dooley carrying a four-point run with her serves. According to Head Coach Mary Wise, Dooley is a different player than when she came into the program.

“Lauren graduated early has been with us for a while. With every player, you just never know when that big jump is going to happen. Everybody’s path is different. We ask them to stay patient and trust the process,” Wise said.

The second set started on the more shaky side with Auburn at a slight lead. Still, the Gators were able to tie it up 10-10 and didn’t let go of the lead from there on out. Holly Carlton and Paige Hammons each contributed three kills. Darrielle King, Ceasar and Dooley each delivered two kills which helped to end the set at 25-19.

By the time the third set rolled around, the Gators were in an unstoppable rhythm. They took a lead right off the bat and forced the Tigers into a timeout. The set concluded at 25-21 where Ceasar added another four kills for herself and Hammons added three. The Gators now sit at 2-0 for the season.

Back on the Court

Head Coach Wise remained wary of whether or not her team would have a season right up until game day. Despite the fact that the SEC season has barely begun, Alabama and Missouri have already postponed matches due to COVID-19 issues. Wise explained that she has remained hopeful but realistic, everything has been an adjustment.

The Florida Gators will play their 2020 home-opening match next weekend Friday, Oct. 30 against Alabama at 7 p.m.

Parker Welch is a Senior at the University of Florida majoring in Sports Media at the College of Journalism & Communications.
@parkerrwelch
Previous Antonio Brown to the Seahawks?
Next Alabama vs. Tennessee Preview