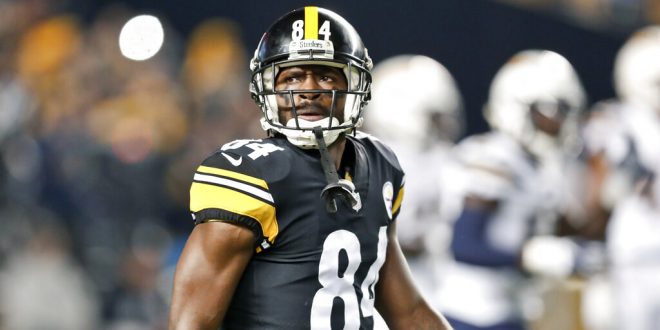 FILE - In this Dec. 2, 2018, file photo, Pittsburgh Steelers wide receiver Antonio Brown (84) plays against the Los Angeles Chargers in an NFL football game, in Pittsburgh. Antonio Brown wants out of Pittsburgh. A person with knowledge of the situation tells The Associated Press the perennial Pro Bowl wide receiver has asked the Steelers for a trade. The person spoke on the condition of anonymity because he was not permitted to publicly discuss personnel matters. Brown appeared to make his decision official in a social media post released on Instagram on Tuesday, Feb. 12, 2019. (AP Photo/Don Wright, File)

Antonio Brown to the Seahawks?

Antonio Brown has not played an NFL down since week 2 of the 2019 season, but the Seattle Seahawks are the next potential team he could play for.

In July of this year, Brown faced an eight-game suspension for violating the NFL’s Personal Conduct Policy.  However, there are a number of teams, including the Seahawks, that are showing interest in signing Brown once his suspension is over.

Per SportingNews.com, among the teams that are reportedly interested in signing Brown are the Seahawks, Patriots, Ravens, Buccaneers and Eagles.  However, Adam Schefter reported that only the Seahawks are in position to sign him at the moment.

With Antonio Brown’s suspension eligible to end after week 8, the Seattle Seahawks are now positioned to make a push to sign him, though they’re not alone, league sources tell ESPN. Other teams also are interested. pic.twitter.com/ykn1NJ6LUm

If Seattle does sign Brown, he would join a star-studded cast at wide receiver which includes D.K. Metcalf and Tyler Lockett.  Their passing game would also become even more potent with 7-time Pro Bowl quarterback, Russell Wilson, running the offense.

How would Brown fit into the Seahawks offense?

If the Seahawks were to sign Brown, there are signs that he could excel in this offense with Russell Wilson at quarterback.  So far, Wilson has 1,502 yards and 19 touchdowns, and if Brown does join the Seahawks his passing numbers should improve.

Lockett and Metcalf also each have 30 and 22 receptions each this season and have combined for nine touchdowns.  Because of this, Brown has the potential to get his share of receptions in this offense.

Brown potentially joining would give Russell another weapon out wide which could cause problems for opposing defenses.  He has the ability to stretch the field in the vertical passing game which would allow other receivers in the short passing game to get open.  Lastly, Wilson’s ability to scramble and find the open receiver is another added element in this offense.

Brown’s suspension ends after week 8, and time will tell where he signs.  If he does sign with the Seahawks, he could potentially make them Super Bowl contenders in the NFC.