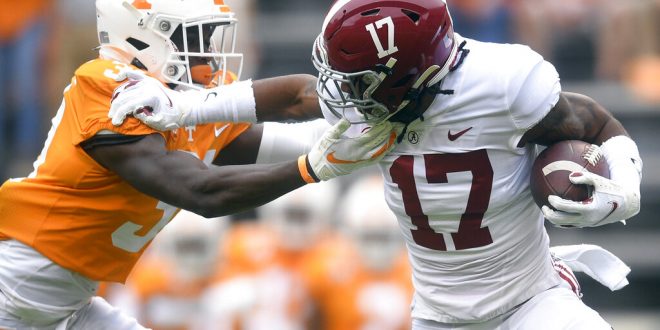 Alabama scored a dominating 48-17 win over rival Tennessee on Saturday, but it also suffered its biggest loss of the season.

Star wide receiver Jaylen Waddle was injured on the game’s opening kickoff and did not return. Head coach Nick Saban said that it was a combination of a high-ankle sprain and a fracture. Waddle is out for the rest of the season after having successful surgery on his ankle.

Nick Saban tells @JamieErdahl that Jaylen Waddle will be out for the year after injury vs. Tennessee. pic.twitter.com/HYcExcqayo

Waddle has been catching the eyes of scouts from the very beginning. The Bellaire, Texas, native was the No. 39 overall recruit in the 2018 class and the No. 5 receiver. Waddle signed with the Crimson Tide on Signing Day in Feb. 2018.

He made an immediate impact on Alabama’s offense. Waddle shredded SEC defenses regularly his freshman year, racking up over 800 receiving yards with seven touchdowns. That was enough for him to win SEC Freshman of the Year.

His production declined in his sophomore season with the emergence of DeVonta Smith and future NFL first-round picks in Jerry Jeudy and Henry Ruggs III. Waddle still had over 550 receiving yards and six touchdowns. He also averaged 17 yards per reception.

In addition to his receiving skills, Waddle was also an excellent special teams player. He had two touchdowns on punt returns and one on a kickoff return in his first two seasons.

Entering the 2020 season, Waddle’s first as a draft-eligible prospect, he was considered one of the top wide receivers in the class. Nationally, he was named a preseason First Team All-American by USA Today, ESPN and Sporting News. Waddle showed that he warranted the hype when he nearly matched his 2019 production in just a few games with 557 receiving yards and four touchdowns before his injury against Tennessee.

How to Replace Waddle

On the surface, it looks impossible for any school to replace a talent like Waddle in the middle of the season. But if any school could do it, it would be Alabama.

For one, Smith is still there. His production has been almost identical with Waddle’s, totaling 556 yards and four touchdowns already. Without Waddle stealing targets, that could mean more emphasis on getting Smith the ball. However, that could also mean that opposing defenses are more likely to double-team Smith without having to worry about Waddle.

Behind Smith, Alabama also has receivers John Metchie III and Slade Bolden. Metchie is third on the team with 499 receiving yards and three touchdowns this season. After not playing much as a freshman, he has quietly turned into an effective receiver.

The other candidate is sophomore Slade Bolden. A former quarterback who moved to wide receiver, Bolden filled in for Waddle against Tennessee. All of his six catches for 94 yards this season came against the Volunteers.

Running back Najee Harris can also help take some pressure off quarterback Mac Jones. Harris has been lethal on the ground and as a receiver. He has 742 yards from scrimmage and 14 touchdowns so far.

The loss of Waddle will sting for Alabama. But that doesn’t mean that there are still weapons for the Crimson Tide to use offensively as Alabama has its sights on another run to the College Football Playoff.