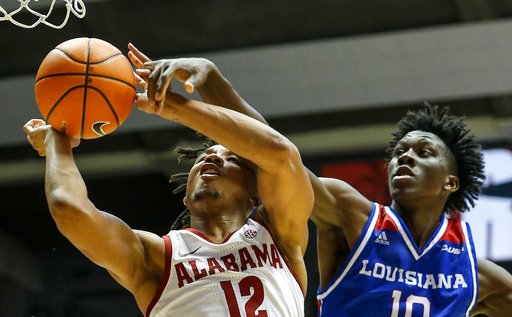 With preseason expectations tapered for the 2020-21 University of Florida men’s basketball team, guys like Anthony Duruji are simply focused on improving each day.

And even with NBA draft hype following the likes of Keyontae Johnson, Scottie Lewis and Tre Mann, the message in the locker room is clear.

Reduce the outside noise. And focus on improvement.

But for the Germantown, Md. native, who sat out the 2019-20 season after transferring from Louisiana Tech, this season also serves as an opportunity.

The man who has been touted as having unearthly athleticism and the ability to jump out of the gymnasium, Duruji hopes to showcase the elements of his game that he’s worked on intensively since transferring to Florida.

Before the 6-foot-7-inch forward left Ruston, La. for the greener pastures in Gainesville, Duruji started in all 33 games as a sophomore for the Louisiana Tech Bulldogs.

And in those 33 games, Duruji made quite an impression.

Add in a strong 22-point offensive performance against the then-22nd ranked LSU Tigers, and it’s clear. Duruji proved that he can play with the big boys.

Through his sophomore stat line, it’s easy to see what kind of player Duruji strives to be.

Add in an innate defensive prowess and an ability to excel in transitional scoring, and Gators fans will salivate.

Because it’s quite clear that Duruji seems to fill several voids that remained unfilled during the 2019-2020 season.

And with his addition, the Gators are poised to vastly improve in the effort categories.

But while his mid-major stats paint the picture of high production and effort, what’s absent is his newly found trait of leadership.

And that’s a trait that Duruji says coach Mike White challenged him to adopt heading into the 2020-21 campaign.

With a handful of other new additions and a strong returning core, the 2020-21 Gators hope to exceed expectations while building on last season’s experience.

The season is an opportunity to showcase the vast differences between this season’s team and last season’s team.

And that separation is incredibly important. Because last season’s team greatly underperformed and proved unable to live up to its preseason hype.

Throughout the 2019-20 season, the Gators appeared stagnant on offense and inept on defense. Consequently, head coach Mike White received sharp criticism from fans and media alike. And some critics questioned the talent of the team.

But Duruji and the other leaders, like Johnson and Mann, insist that they’re blocking out the noise.

With the departures of Andrew Nembhard and Kerry Blackshear Jr., many are unsure how Florida will replace the lost production from the front- and backcourts.

But the emphasis seems to lean toward a change in philosophy, rather than an emphasis on personal production.

Duruji suggests that the Gators adopted an up-tempo pace with an emphasis on pressing while on defense. That transition should rely heavily on the increased levels of strength and conditioning that the roster adopted this offseason.

For the new Gators’ forward, the up-tempo style should perfectly mesh with his skillset.

And Duruji hopes that this match made in basketball heaven produces a breakout season.

Previous Gator legend Jack Youngblood is next Mr. Two Bits
Next Miami’s Tua Tagovailoa is Excited for First Start Against the Rams