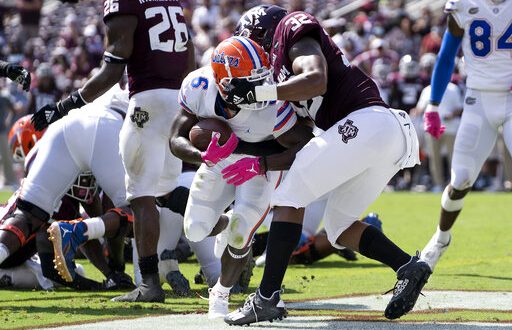 Gators Look to Pick Up Where They Left Off

Florida has not seen live game action since Oct.10 against the Texas A&M Aggies. The Gators experienced a COVID-19 outbreak within their program in the days after the team’s trip to College Station, Texas.This led to the postponement of the team’s scheduled matchup with LSU. That game is now set to kick off on Dec.12.

Cases kept climbing into last week, as Florida reported 25 new positive tests, including head coach Dan Mullen. Then they were forced to push back last week’s game against Missouri to Saturday.

Despite all the challenges, the Gators were finally able to get back to a sense of normalcy this week in preparation for the Tigers. Mullen said he and the players are eager to get back on the field and play in front of the home fans.

In addition to not playing a game in two weeks, Florida also has not seen the practice field, either. And Mullen said it was expected that the team would be a little rusty coming back. But each day this week has shown more improvement.

Trask is trying to follow the lead of his head coach and treat the roughly two-week period as a bye week.

While those watching will be anxious to see how the offense looks, perhaps the biggest focal point will be the defense. The Gators have struggled on this side of the ball through three games, and defensive coordinator Todd Grantham said physicality is the main thing Florida needs to improve on.

Aggressiveness will be key for Florida as it faces a Missouri squad with a lot of confidence heading into Saturday’s matchup.

Head coach Eliah Drinkwitz has his Missouri squad playing well at a little over the halfway mark on the season. The Tigers defeated the Kentucky Wildcats last week, 20-10, in what was an impressive defensive showing.

Missouri held the Wildcats to 145 yards of offensive, including only a total of 50 passing yards. Furthermore, the Tigers got another big game from senior running back Larry Rountree III, who finished his day with 37 carries, 126 yards and two touchdowns.

Drinkwitz knows Saturday’s game will be a challenge for his team. Especially in going up against Grantham on the opposing side.

The Gators’ offense has put up big numbers through their first three games so far this season. And Drinkwitz credited Mullen with how he schemes is offenses and involves so many weapons on the field.

There are a number of headlines heading into Saturday’s contest. How will Florida come out after being off for two weeks? Can Missouri slow down the Gators’ offense and do enough to keep it close throughout? We’ll find out the answers to all these questions when the ball is kicked off at 7:30 p.m.