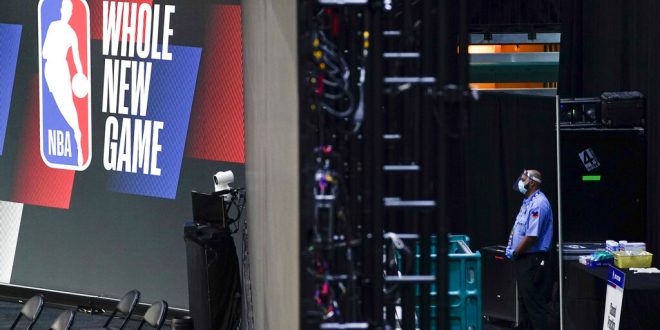 FILE - In this July 29, 2020, file photo, a security guard wearing a face mask stands near a basketball arena inside thre NBA bubble at ESPN Wide World of Sports Complex in Lake Buena Vista, Fla. The NBA had teams in the bubble for three months. The NHL playoff bubble lasted 65 days from the time teams arrived in Toronto and Edmonton, Alberta, until Tampa Bay won the Stanley Cup. Officials from both leagues beamed that mask, distancing and other protocols were still being followed strictly on the final day. (AP Photo/Ashley Landis, File)

Even though it feels as though the 2020 NBA season had just ended, the start of the upcoming 2021 season could be right around the corner.

The NBA is aiming to start the 2021 season on Dec. 22, but there is much push-back from the National Basketball Players Association (NBPA) when it comes to making this decision. This decision would allow for a 10-week break between the end of the 2020 season and the start of the 2021 season, which is half of the normal break.

In addition to an earlier start date, there would be a shortened regular season with 72 games. Like this past season, fans would likely remain prohibited from attending regular season and postseason games as well.

The NBPA and players reportedly want the 2021 season to start around Martin Luther King Weekend, in mid-January. With the early start date, the training camps would have to open around Dec. 1. This leaves teams with little time to prepare for the upcoming season. The early start date hurts the Miami Heat and Los Angeles Lakers the most. The two teams would have the least amount of time to recover after their recent playoff run.

There's still a gulf between NBA and NBPA on a start date for the 2020-2021 season, sources tell ESPN. NBA wants pre-Christmas; NBPA still preferring mid-January. Economic issues remain significant, including escrow withholding on player salaries w/ revenues down b/c of no fans. https://t.co/tX4dlyP1EE

Money is the Main Reason for Early Start

Money drives the league’s desire to start the 2021 season prior to Christmas.

The COVID-19 pandemic caused the league to lose much revenue this past season. ESPN’s Adrian Wojnarowski reported that the NBA lost ten percent of its revenue due to the postponement of the season, the shortening of the season, and the lack of fan attendance.

The COVID-19 pandemic could continue to affect the league’s revenue as there is no assurance of fans attending games this 2021 season. The lack of fans for the entirety of the 2021 season could cost the league even more money. The league could reportedly lose up to $4 billion due to the lack of fans.

The early start would also benefit the league’s revenue from broadcasting agreements. The early start allows for the 2021 season to come to an end before the start of the 2021 Olympics in Tokyo. The NBA would not have to compete with the Olympics for airtime and viewership. The league is predicting an extreme loss of revenue if they have to compete with the Summer Olympics over television ratings.

The decision should be made about the starting date of the 2021 season by Friday.