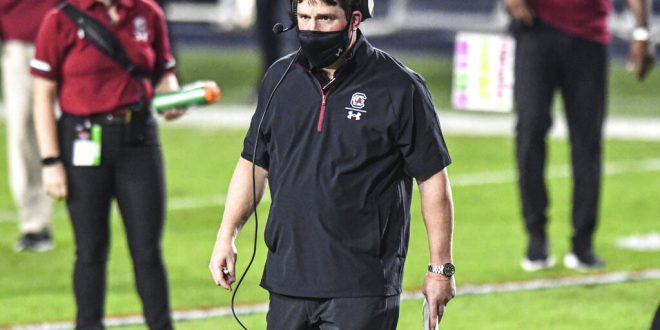 South Carolina coach Will Muschamp heads to check on an injured player during the first half of the team's NCAA college football game against Mississippi in Oxford, Miss., Saturday, Nov. 14, 2020. (AP Photo/Bruce Newman)

Will Muschamp has been fired as head football coach at the University of South Carolina. Offensive coordinator Mike Bobo will takeover and serve as the Gamecocks’ coach for the remainder of the season.

Breaking: South Carolina has parted ways with head football coach Will Muschamp in the aftermath of the Gamecocks' third straight loss, a 59-42 setback to Ole Miss on Saturday, sources told ESPN's @ClowESPN. pic.twitter.com/w2wkNNcuYr

The decision to part ways with Muschamp happened after South Carolina’s 59-42 loss to Ole Miss on Saturday night. The Gamecocks have allowed a total of 159 points during their three-game losing streak and gave up 708 yards of total offense in the loss to Ole Miss, ESPN reported.

Muschamp’s first season at USC, he led the Gamecocks to a 6-7 record with an appearance in the Birmingham Bowl. In his second season Muschamp saw USC win nine games.

However, the Gamecocks finished 4-8 a year ago and have lost 14 of their past 20 games. USC finished the 2019-2020 season 4-8 despite battling injuries. The Gamecocks followed with a 2-5 start to this season.

“Our search for a new head coach begins today, and I have every confidence that Coach Tanner will find the right person to lead our program,” USC President Robert Caslen said.

Freeze recently signed a contract extension with Liberty University, but his name is still expected to come up. He went 20-5 at Lambuth, finished 10-2 at Arkansas State and compiled a 39-25 mark at Ole Miss. The Flames are 16-5 over the last two years and claimed the program’s first bowl bid with a victory in the Cure Bowl in 2019.

Chadwell is the head football coach and offensive coordinator for Coastal Carolina and his value as a coach is on the rise. Coastal Carolina is now No. 15 in the country and are quickly emerging as the season’s feel-good story. Previously, Chadwell went 22-14 as North Greenville’s coach, 3-7 at Delta State and 35-14 at Charleston Southern.

Elliott is an assistant coach at Clemson University and serves as the offensive coordinator and running backs coach. Elliot has been the school’s most valued play-caller and losing him would significantly weaken Clemson. Elliott, 40, has long been the quiet, steady presence behind Clemson’s offensive juggernaut.