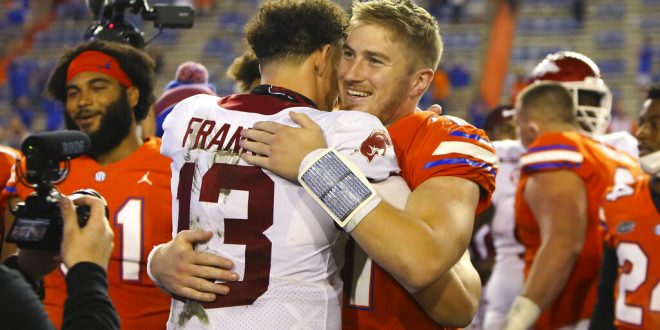 Week 11 of the college football season saw everything from a high-scoring offensive battle, a head coach firing and history-making.

Allen made a statement regarding his son’s injury in the Hoosiers postgame press conference.

In this game, Indiana’s defense was stellar. The Hoosiers didn’t allow any points and forced four turnovers including two interceptions from sophomore defensive back Taiwan Mullen.

With Notre Dame’s 45-31 win over Boston College on Saturday, Notre Dame head coach Brian Kelly has won 100 games with Notre Dame. When asked about this, Kelly talked about the help he’s gotten from his players and coaches over the years. Kelly also said, “I have been really fortunate to be here at Notre Dame that long.”

In his time as head coach for the Fighting Irish, Kelly has led them to eight bowl games (five victories) and a trip to the 2013 National Championship in which they lost to Alabama.

Florida vs. Arkansas includes a push for college football Heisman

The Florida Gators welcomed Arkansas’s Feleipe Franks back to the Swamp in Saturday’s game. Furthermore, Franks was Florida’s quarterback for three seasons before transferring to Arkansas after losing his spot to Kyle Trask after an injury.

Florida won in a high scoring 63-35 win. Trask played stellar throwing for six touchdowns for the second time this season. Additionally, Trask earned the SEC’s Co-Offensive Player of the Week along with Ole Miss’s Matt Corral. Trask at one point received chants from the crowd of “Trask for Heisman”.

Following this loss, the fifth on the season, South Carolina has decided to part ways with head coach Will Muschamp. In his five years, Muschamp had a record of 28-30 including a Bowl win in 2017. Offensive Coordinator Mike Bobo will finish the season as interim head coach, sources say.

Jensen Young is a journalism student at the University of Florida. He works as a sports writer for WRUF.com and is the voice of trendings on Wednesday mornings on the WRUF radio station.
@Jensen_Young9
Previous South Carolina fires Head Football Coach Will Muschamp
Next Williston Red Devils Say Goodbye to the 2020 Season