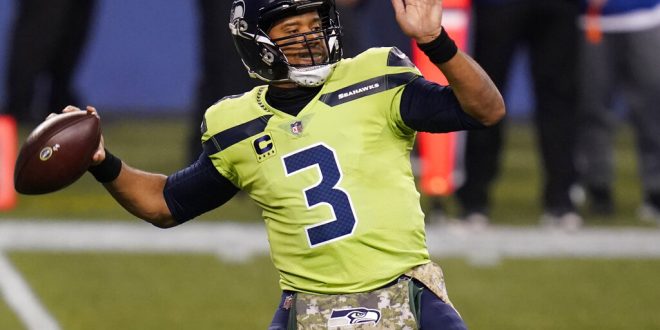 Seattle Seahawks quarterback Russell Wilson passes against the Arizona Cardinals during the first half of an NFL football game, Thursday, Nov. 19, 2020, in Seattle. (AP Photo/Elaine Thompson)

Russell Wilson leads the Seattle Seahawks as they travel to Philadelphia to play the Eagles in Monday Night Football. The Seahawks are (7-3) while the Eagles are struggling at (3-6-1).

One of the top storylines going into Monday night’s game are the quarterbacks.

The Seahawks are led by Wilson who is tied for the second most touchdowns this season. Furthermore, he has 30 touchdowns and is undefeated against the Eagles.

With Seattle's win over Arizona last Thursday, Wilson’s win percentage of .770 passed Steve Young (.767, 23-7) for the best win pct in prime-time games by a starting QB since 1950.

Wilson said the Eagles defense is good and the Seahawks need to be ready to roll in order to win.

The Eagles will start Wentz who has not played well this season. He has 14 touchdowns and 14 interceptions. He has the most interceptions of any quarterback in the NFL.

However, there has been good progress from rookie backup quarterback Jalen Hurts.

Head coach Doug Pederson said he has been learning a lot of the terminology and has done well up to now.

Nonetheless, Wentz will start Monday night’s game. Pederson said that he has seen great leadership from Wentz and that they are in it together.

The Seahawks must beat the Eagles to remain the top team in the NFC West.

With their current record, a loss will keep them tied with the Los Angeles Rams for the top spot. Following close behind is the Arizona Cardinals at (6-5).

Wilson said the team needs to do whatever it takes to win and try to keep everyone healthy.

The NFC East is also very close with all teams being within one win of each other.

The teams at the top are the New York Giants and the Washington Football team both with a record of (4-7).

As with many teams this season, injuries continue to be a problem for both teams.

On the Eagles side, their offensive line has been difficult to keep healthy and playing each game. For Monday’s game, guard Sua Opeta is out with a back injury.

Coach Pederson said it is a challenge to get the continuity with the offensive line, but playing together as a unit helps to win games.

On the Seahawks side, throughout the season their issue has been their running backs. However, only one of their backups, Travis Homer, is out with a wrist, thumb and knee injury.

On the other hand, Wilson said he is lucky in avoiding injury but it also has to do with his awareness and play style.