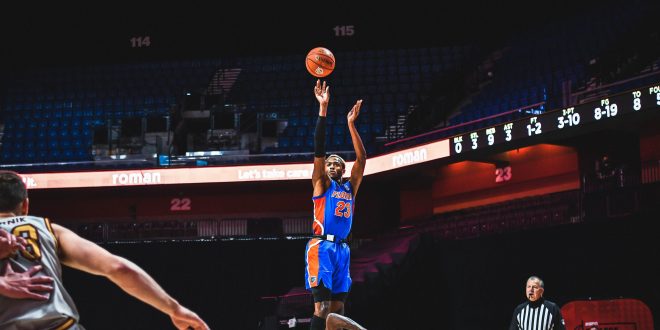 It’s a busy weekend for the Florida Gator basketball program. Both men and women are in the O’Connell Center this preparing for their respective games.

The Gators are off to a 2-1 start this season. Florida will play its third and final game of the week. The Gators will continue their season as they return to the O’Connell Center after facing off against Florida State on the road and taking down Charleston Southern 67-52 at home on Wednesday.

Leading the Gators team in scoring for their last matchup is Senior Kiki Smith, scoring 15 points, making that her third time in double-digits out of their three games played this season. Close behind Smith is Nina Rickards, who added 12 points and seven rebounds.

Cincinnati comes into this game with a 1-0 record. Prior to this game against the Gators, the Bearcats defeated Northern Kentucky Norse 73-67. The Bearcats senior Iimar’i Thomas led the team in scoring with 34 points, seven rebounds and six assists.

The Gators women’s game will tip-off Saturday at 1 p.m. in the O’Connell Center.

The Gator men’s basketball team makes their home debut, Sunday hosting Stetson University, after spending the week in Connecticut for the Mohegan Bubbleville. The Gators have started the season 2-0, taking down the Army Black Knights 76-69 on their first day in the bubble. After defeating Army, they played Boston College the next day, winning 90-70.

In their battle against Boston College, the Gators managed to have five players with double figures.

Stetson University is 0-1 to begin their season. The team played their first game Monday, against Emmanuel GA losing 64-61. The basketball program comes into this match missing numerous practices due to spending time in self-quarantine due to COVID- 19 cases rising throughout the program.

The Gators are set to tip-off in the O’Connell Center Sunday, at 2 p.m.