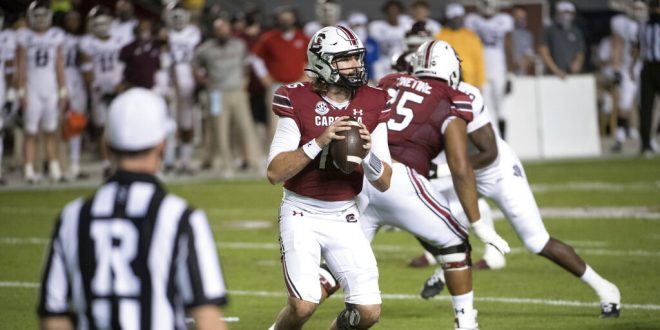 The Kentucky Wildcats (3-6) will host the South Carolina Gamecocks (2-7) in an SEC East battle that will conclude each team’s regular season. The game will kick off at 7:30 p.m. at Kroger Stadium in Lexington, Kentucky.

South Carolina’s matchup this weekend will be the second under interim head coach Mike Bobo. In his first game as head coach, the Gamecock’s lost 45-16 to Georgia (6-2) last Saturday. Bobo took over as coach after South Carolina fired head coach Will Muschamp on November 15.

South Carolina won the last matchup between the two teams beating Kentucky 24-7 in last year’s September matchup. The Gamecock’s win over the Wildcats last season broke a five-game losing streak against Kentucky dating back to 2014. South Carolina leads the all-time series between the programs 18-12-1.

South Carolina will look to end their season on a high note after struggling down the stretch. After beginning the season 2-2, the Gamecocks have been on a five-game slide with their last victory coming over Auburn on Oct. 17.

In Mike Bobo’s first game as head coach, the team saw some changes on the field in the loss to Georgia. The biggest change came at the quarterback position.

Quarterback Luke Doty made his first start of the season after finishing the second half of the team’s 17-10 loss against Missouri on Nov. 7. Doty completed over 80% of his passes while throwing for a touchdown and an interception last week. Many in South Carolina are excited about Doty’s future in the program, according to The State.

Doty and Bobo will both be looking to earn their first wins this season and help the Gamecocks finish 3-7.

One of the bright spots for South Carolina’s season has been running back Kevin Harris. Harris has rushed for 928 yards and 14 touchdowns this season. With a big game this weekend, Harris could eclipse the coveted 1,000-yard marker for running backs.

Kentucky will also be looking to turn their season around after losing to College Football Playoff hopefuls Alabama (8-0) and Florida (7-1) the previous two weeks.

This weekend’s game will probably also be the last of senior quarterback Terry Wilson’s Kentucky Career. Wilson started every game of his sophomore season in 2018 where the Wildcats had their first 10-win season since 1977. Wilson has split time with transfer quarterback Joey Gatewood this season throwing for 894 yards and 7 touchdowns to go along with 4 rushing touchdowns.

Kentucky has struggled to have the full roster of coaches and players in their last three matchups due to Covid-19 issues. The Wildcats expect to have more players and staff back against the Gamecocks this weekend, according to AP sports writer Pete Lacobelli.