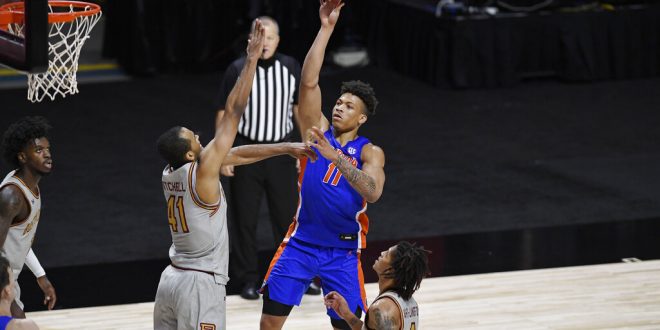 The Florida Gators Men’s basketball team is off to an undefeated start. Last night, they topped Boston College, 90-70, to improve to 2-0.

Florida was led by Keyontae Johnson’s 24 points and 12 boards and Tre Mann’s 17 points and 6 assists. Johnson converted 10 of his 13 field goal attempts. Mann did some damage in the first half, scoring 15 of his 17 points. Scottie Lewis added 14 points and 5 boards, and Noah Locke scored 12. The Gators played better defense compared to their season-opener against Army.

“It was our first game and we had a lot of nervous energy. We made a lot of simple mistakes,” Junior forward Keyontae Johnson. “Today, we just locked in and played defense like we were supposed to.”

Head Coach Mike White’s plan to have a more up-tempo offense and to press harder has been panning out well so far for the Gators. His young squad has matured and the addition of some key transfers have also been key.

“Offensively, I thought we were more in character, in terms of searching for the right shot — and our shot selection wasn’t perfect at all. but it was better. We executed for each other at a higher level,” Gators coach Mike White said. “But more importantly, we played harder, with more discipline and more pop on the defensive end. Our attention to detail and our buy-in to getting stops was higher than it was [against Army]. We grew [this game], got better, and that’s the biggest thing.”

The Gators are set to host Stetson Sunday at 2 p.m. for their first home game of the season. The game will air on the SEC Network and you can also listen in on the Gator Sports Network via radio.