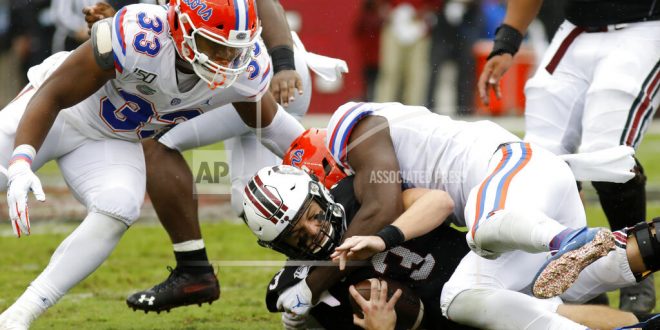 Zach Carter Remains a Force on the Front Seven

The Bright Spot on a Dim Defense

Although the Gators’ have dealt with defensive struggles all season, Zachary Carter has remained a force to be reckoned with. The 6 foot 4,290-pound defensive lineman has demolished his way through SEC offenses, wreaking havoc for rival quarterbacks.

Earlier this year, Carter’s stellar performance against South Carolina led him to earn SEC Defensive Lineman of the week. During his production versus the Gamecocks, Carter accounted for eight total tackles and 1.5 sacks along the way. He also recorded a career-high five quarterback hurries against Georgia, while only playing the second half of the game.

Carter started all 13 games in his 2019 campaign and led Florida to be the only school in the SEC with more than six players with at least 3.0 sacks. In those 13 appearances, Carter tallied 31 tackles, tied second on the team with career-highs in sacks (4.5) and tackles-for-loss (7.0).

Heading into a majority of Florida’s matchups this season, the ball was being run down the Gators’ throats. Florida’s run defense was getting trampled as opposing running backs would enter Gator territory with ease.

The Gators’ run-stopper provided insight on how Florida’s defense has adjusted to the run game over the course of the year.

“We’ve been coming together and in practice we’ve been making sure what style and our fits. Just all the little things you need and it shows up on Saturday’s.”

The redshirt junior looks to continue anchoring down the Gators’ defensive line after losing a majority of its starters to the 2020 NFL Draft. Carter has proved he’s been able to bolster the Florida front seven and terrorize the offensive lineman he faces.

Catch the bulldozing force in action as Carter continues his breakout season versus LSU Saturday night in the Swamp.

Angel is a student at the University of Florida. She is a Multimedia Journalist who is currently a Sports Reporter and Writer at ESPN Gainesville. Follow her on Twitter (@angelcwells) and Instagram (@angel_wells). Be sure to follow her NFL Twitter account to stay up to date with the latest NFL news. (@UpToDate1NFL)
@angelcwells
Previous Super Bowl LIII Rematch: Rams, Patriots Game Prediction
Next Oak Hall Boys Basketball Falls to Trenton, 65-63