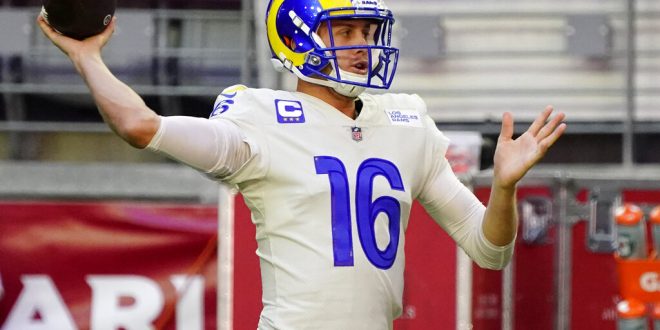 Now the underdogs, Patriots (6-6) are chasing the AFC playoffs. The Rams (8-4) are fighting to maintain the No. 1 spot in the NFC West.

This is the Patriots first time back in Los Angeles playing the Rams since 1992 before New England moved. They played 12 times in the regular season and twice in the super bowl. Patriots lead the series 9-5 overall, and 2-1 in LA.

LA is looking to redeem themselves after the 13-3 loss in Super Bowl LIII. Jared Goff, who was LA’s quarterback that season, has improved his overall passing game and is ranked No. 23 per ESPN and No. 15 per Pro Football Network in the Quarterback Power Rankings.

Nonetheless, Patriots quarterback Cam Newton is still navigating his new team. The Patriots are finding their identity late in the season, yet Newton adds a new factor to the New England offense- run game.

All in all, both quarterbacks weaknesses will be challenged tonight.

Since their last meeting in 2019, the Patriots lost Tom Brady but gained an athletic Cam Newton. Newton struggled the first games of the season and New England’s starting record was 2-5, but improved 4-1 since November.

Although he adds mobility, Newton struggles with passing. He passed 12/17 for 69 yards and only had one passing touchdown against the Chargers in a 45-0 win.

Still, he leads the league in most rushing TDs by a QB in a single season (4). Additionally, Newton is also on target to become the first quarterback in the Super Bowl era to start eight-plus games and finish with at least twice as many rushing scores as passing, per NFL Research.

Although questionable for tonight’s game, Newton has to spark a run game tonight to combat the Rams’ top-five defense. If forced to pass, Newton could be disrupted by a dominating Rams defense, who is top five in sacks per play, but struggles against running quarterbacks.

Coming off a bad game week 12 against the 49ers, he redeemed himself with a stunning performance against Arizona. Goff threw 37/47 for 351 yards, one touchdown and zero interceptions.

A 351-yard performance by QB1.@JaredGoff16's top plays from the win! #ProBowlVote pic.twitter.com/6sMRYfC6AQ

This season, Goff averages 281 yards per game and has 17 touchdowns. His short, timely throws- 10 yards or less– is where he is most comfortable.  However, Goff struggles with deep passes and is susceptible to interceptions, with 10 already this season.

The Rams are 5-0 when throwing no interceptions.

The biggest testament of tonight’s game will be each team’s defense.

The Rams are currently ranked fifth in defense and have a dominant secondary squad. Cornerback Jalen Ramsey is solid in the secondary with Troy Hill, who had a huge pick six versus the Cardinal. Rams held the Cardinals to 232 yards last week with thanks to Ramsey, Hill, John Johnson and Jordan Fuller.

Moreover, LA allowed more than 28 points only one time this season and has a total of 36 sacks.

He leads the NFC with 11 sacks for the fourth consecutive season, the longest-active streak in league history. Also, the Rams o-line is steady with Sebastian Joseph-Day, Michael Brockers, Troy Reed and Kenny Young carrying the offense with Donald.

Furthermore, New England’s defense ranks seventh in defense. Cornerback JC Jackson is consistent in the secondary and carries the Patriots on big defensive plays. He has seven interceptions, 12 passes defended and three fumble recoveries each.

Stephen Gilmore is back for the Patriots tonight after shutting down Keenan Allen and DeAndre Hopkins last week.

New England has a 13% chance of making it to the playoffs, but a win tonight boosts their chances to 28%. Yet, a loss would drop them 5%, per FiveThirtyEight.com.

The Patriots defensive secondary must show up tonight to stop the Rams pass catcher’s. The defense also needs to pressure Goff to make him run instead of passing. On the contrary, Patriots need to win on the ground with a strong offensive line to prevent Newton from passing often. Newton has to leave the pocket, but if he restricted, should  focus on passing to getting the first down.

LA has depth in their roster with versatility in running, pass catches and defense. The Rams are the favorites to win tonight unless Goff folds under pressure. New England’s grounded, seventh-ranked defense will challenge the Rams o-line to pressure Goff out of the pocket.

The Super Bowl LIII rematch will be a competitive defensive game.

Currently a student at the University of Florida obtaining a B.S. in Sports Journalism and Media, with a concentration in Sports Management. I am pursuing a career in sports media whilst open to careers in sports journalism, event planning, sports event planning, sports media and broadcasting and sports administration. I have a strong work ethic and am willing to learn various sports entities and programs in fast-paced environments.
@harperxxwrites
Previous Mike Glennon and Jaguars Face Titans in Rematch
Next Zach Carter Remains a Force on the Front Seven