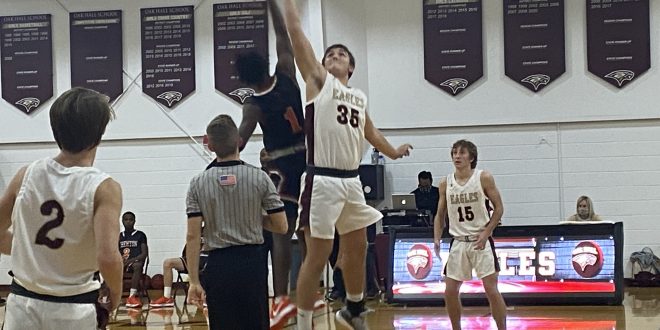 Sophomore Dylan Provencher leaps for the jump ball against the Trenton Tigers on Thursday, December 10th.

After a loss to the Bronson Eagles six days prior, the Oak Hall Eagles boys basketball team (1-1) took on the Trenton Tigers (2-4), led by coach Cedric Booth on Thursday. Playing on their home court, the Eagles were hungry for a win to boost them to a winning record and bounce back from their loss. Despite a big night from senior Matthew McKinney, the Eagles fell just short in the closing minutes, losing to Trenton 65-63.

The Oak Hall boys basketball team (1-1) is here warming up for their game against the Trenton Tigers (2-4). Trying to rebound after their loss to Bronson, the Eagles will be hungry for a win to get them above .500. @ESPNGainesville @athletics_hall pic.twitter.com/dSrpzEktug

Early in the first quarter, the Eagles were put at a handicap; senior Andrew Pickens fell to the floor with an apparent leg injury, and would not return for the remainder of the game. Despite this set-back, Oak Hall was still able to get on the board early. McKinney opened the game with a three-pointer, which would certainly not be his last, and a committee of Eagles scored to put Oak Hall up 13-7 with a few seconds remaining in the first quarter. After a buzzer-beater three-pointer from freshman Andrew Grant, it was 16-7.

Also early in the game, it became apparent that the Eagles were determined to own both backboards and rebound the ball as much as possible. Oak Hall made multiple shots early that would not have been possible without an offensive rebound first setting up the play. As the game went on, it became clear that whoever could rebound better would likely win the game.

After starting slow in the first, Trenton took over the game in the second quarter. On the back of a 13-0 run for the Tigers, Oak Hall watched its’ nine-point lead vanish in a matter of minutes. Despite this, the Eagles managed to not let the game get away from them; McKinney began to distribute the ball throughout the offense, and Oak Hall got players into the paint and drew fouls to answer the offensive surge from the Tigers. At the end of the first half, the Eagles had managed to scrape out a three-point lead, despite losing the quarter by six.

McKinney started the game acting more as a facilitator to compensate for the absence of Pickens, but he became a lethal shooter in the second half. Opening the third quarter with three consecutive three-pointers, McKinney got his team out to an eight-point lead. Trenton then answered with a three of their own, a mid-range shot, and a trip to the free-throw line. This cut into the lead to give Oak Hall a five-point lead going into the final quarter.

Sophomore Dylan Provencher heated up in the final quarter of play; he dominated inside the paint, scoring all but six of the Eagles’ fourth-quarter points. However, Trenton also got into a rhythm, except behind the arc instead of inside the paint. Along with this, the Tigers finally fixed their rebounding problem and managed to preserve a few offensive boards of their own. With these two factors, the Eagles couldn’t find enough of the basket to keep up, and Trenton etched out a two-point victory and now gives Oak Hall a 1-2 record on the season.

After this tough loss, the Eagles are right back at it Friday night as they take on St. John Lutheran at home in a game that should be an easy way to bounce back from defeat.

Carson Cashion is a first-year student at the University of Florida, and has a major in journalism- sports and media. Originally from the Orlando area, Cashion covers the UF Gymnastics Team, having formerly covered Oak Hall Sports.
Previous Zach Carter Remains a Force on the Front Seven
Next Rams Win Big in SB LIII Rematch, Patriots’ Playoff Chances Fading