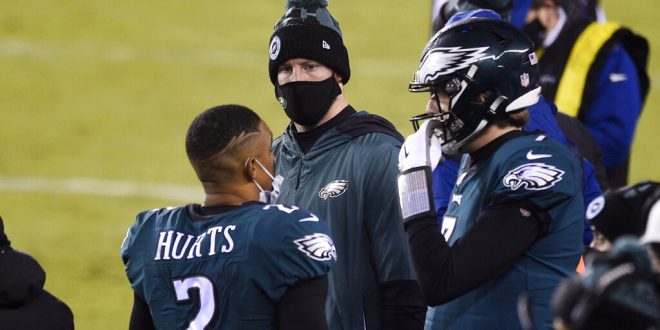 Philadelphia Eagles' Jalen Hurts, from left, Carson Wentz and Nate Sudfeld talk during the second half of an NFL football game against the Washington Football Team, Sunday, Jan. 3, 2021, in Philadelphia. (AP Photo/Derik Hamilton)

The Eagles fired Doug Pederson on Monday after five seasons as the head coach. Pederson guided the Eagles to their only Super Bowl win in franchise history in 2017 and is now out after a 4-11-1 season. His status for 2021 was up in the air before a meeting with owner Jeffrey Lurie. It was reported that the two had different visions for the future of the Eagles which prompted Lurie to make the change. Take a listen to what ESPN’s NFL Insider Adam Schefter had to say.

Pederson’s firing can also be attributed to the Eagle’s offensive struggles and handling of franchise quarterback Carson Wentz’s development. In a season where 2020 was the highest scoring year in NFL history, the Eagles offense took a step back.

Wentz set a career low in completion percentage, yards and passer rating all while leading the league in giveaways. He was benched after 12 weeks in favor of Jalen Hurts who looked to provide a spark over the last couple weeks in the regular season. Before any decision is made on the starting quarterback for the Eagles, Lurie and general manager Howie Roseman will be tasked with finding a new head coach. Here are some of the possible candidates.

Todd Bowles has been the defensive coordinator of the Tampa Bay Buccaneers for the past two seasons. He was also the New York Jets head coach from 2015-2018. Bowles is a catalyst for the Bucs defensive play that ranks in the top-10 in almost every major statistical category. In addition, Bowles has deep ties to Philadelphia area.

And Sal Pal says the Eagles are requesting permission to interview Bucs' DC Todd Bowles as well, which would bring him back to the city in which he played college football at Temple from 1982-'85. https://t.co/C6MsJWJB9q

Smith is one of the most popular names in the pool for teams needing a new head coach. With the Tennessee Titans since 2011, Smith has been the offensive coordinator since 2019. He is a big reason for the Titans success on offense through 2,000-yard rusher Derrick Henry and the revitalization of Ryan Tannehill’s career.

If there’s any coach that could fix Wentz it might be Smith. Since taking over as the starter for the Titans in Week 7 of the 2019 season, Tannehill is first in the league in yards per attempt and third in touchdowns and passer rating. In addition, the Eagles hold the sixth overall pick in the 2021 NFL Draft and will look to be adding weapons this offseason. This could be an appealing job for Smith.

Salah is another name that has received a lot of buzz in the head coaching pool the last couple years. As defensive coordinator for the San Francisco 49ers since 2017, the Niners have had one of the NFL’s best defenses. In addition, he is a big part in the development of Nick Bosa, Solomon Thomas and the late career success of Richard Sherman.

If the Eagles are interested in Saleh, they may have to act quick. According to Ian Rapoport, the Jets are flying in Saleh for a second interview and he is the first known finalist for their head coaching vacancy. Saleh is someone else who is likely to find himself in a head coaching role next season.

Eric Bieniemy is yet another name that has surfaced around the league the last couple of seasons. He has been the offensive coordinator for the Kansas City Chiefs the last three seasons and has done wonders with Patrick Mahomes and the rest of that offense. Bieniemy is also likely to find himself in a head coaching position next year, it’s just a matter of where. For a team that lacked offense this season, an offensive mastermind could be the way to go.

If the Eagles were to lure Riley away from Oklahoma, it would be one of the biggest storylines heading into the 2021 season. This hire could also result in permanent change of quarterback in favor of Jalen Hurts. This is because of the connection Hurts and Riley have from Oklahoma. Hurts had his best college season in 2019 with Oklahoma which was a big reason to the Eagles selecting him in the second round. If the Eagles were to go this direction, they’d be getting a young, energetic coach that has proven himself on the college level.

Now, it’s a waiting game for who the Eagles will hire. Whoever that person is, they’ll have a tough decision to make at quarterback and will be dealing with one of the worst cap situations in the league.