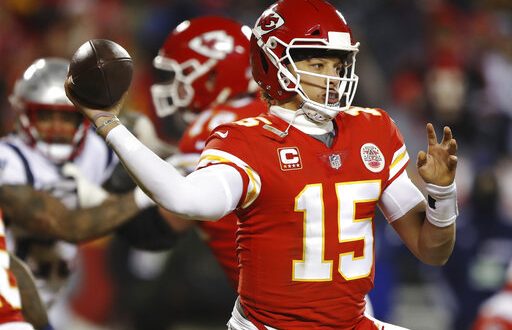 After securing the top seed in the AFC and clinching a first-round bye, the Kansas City Chiefs will start their playoff run at home on Sunday. Kickoff is set for 3:05 p.m. on CBS.

The defending Super Bowl champions will host the 12-5 Cleveland Browns at Arrowhead Stadium. As many of Kansas City’s starters rested during week 17, the Chiefs should be well-rested. Reigning Super Bowl MVP Patrick Mahomes and company have yet to touch the field in the new year.

Meanwhile, the Browns enter Sunday’s matchup fresh off a road playoff victory over the Steelers. In a 48-37 shootout, Baker Mayfield threw for 267 yards and three touchdowns. Chiefs head coach Andy Reid praised Mayfield’s maturity on the field. “He’s fallen in love with this scheme…and mastered it,” Reid noted.

Cleveland’s formidable backfield also proved itself against Pittsburgh as Nick Chubb and Kareem Hunt combined for over 200 all-purpose yards and three touchdowns. What’s more impressive, however, is that the Browns’ offense achieved all of this in the absence of their head coach, Kevin Stefanski.

Stefanski, who was hired just over a year ago, missed last week’s playoff game due to “very, very mild symptoms” of COVID-19. That said, Stefanski returned to practice Thursday and expects to coach Sunday’s game.

Despite battling several injuries in the trenches, Stefanski is confident in Cleveland’s “next man up” mentality. “We’ve been without guys for various reasons all year and guys step up. It’s just the nature of this beast,” Stefanski said.

Although the Browns will likely face their toughest challenge all season, Stefanski likes his team’s odds. “We’re one of eight teams,” Stefanski said. “I’m not a math major, but we’ll take those chances.”

The Chiefs’ high-powered offense led by Patrick Mahomes was the only unit in the NFL to average over 400 yards per game in the regular season. Mahomes once again delivered an MVP-caliber season. He passed for over 4,700 yards and threw 38 passing touchdowns to just six interceptions. Meanwhile, tight end Travis Kelce and wide receiver Travis Kelce combined for nearly 2,700 receiving yards and a staggering 26 touchdowns. WR Sammy Watkins, who suffered a calf injury in week 16, remains questionable despite not practicing Thursday.

Since week 15 when rookie running back Clyde Edwards-Helaire suffered ankle and hip injuries versus the Saints, the Chiefs haven’t gotten much going through the ground game. Edwards-Helaire is currently listed as questionable, although he did not practice Thursday. In his absence, the Chiefs would need to rely on a committee of backs including veteran Le’Veon Bell.

Defensively, the Chiefs have allowed under 21 points in nine games this season. Safety Tyrann Mathieu’s six interceptions ranks third in the league, while defensive linemen Chris Jones and Frank Clark combined for 13.5 sacks.

Matching Cleveland’s physicality on Sunday is going to be a major key. pic.twitter.com/eFZWX4RGfz

Andy Reid’s track record coming off of a bye is nothing short of spectacular. Reid is 24-5 following a regular-season or postseason bye week. Although the game script may favor Kansas City, head coach Andy Reid made it clear he is keeping his team focused on the game at hand.

According to Reid, the key is to “try not to look that far ahead.” Instead, Reid and the Chiefs are focused on “tak[ing] care of business against the Browns.”

Hello, I am currently a junior at UF studying sports media journalism with a concentration in Political Science. I contribute web and radio content weekly for WRUF ESPN Gainesville. Be sure to check out some of my recent articles!
Previous Saints Look to Stop Bucs a Third Time
Next Believeland in Cleveland