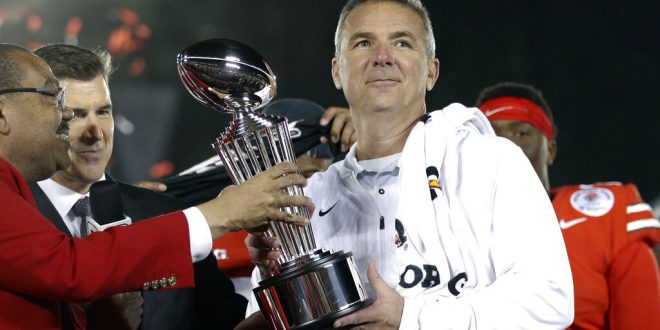 FILE - Ohio State coach Urban Meyer, right, holds the trophy after the team's 28-23 win over Washington in the Rose Bowl NCAA college football game in Pasadena, Calif., in a Tuesday, Jan. 1, 2019, file photo. A person familiar with the search says Urban Meyer and the Jacksonville Jaguars are working toward finalizing a deal to make him the team's next head coach. The person spoke to The Associated Press on the condition of anonymity Thursday, Jan. 14, 2021, because a formal agreement was not yet in place. (AP Photo/Jae C. Hong, File)

A Gators’ legend is back in the state of Florida. This time, however, he’s going pro in Jacksonville. Urban Meyer is back at the helm.

Meyer said in a Jaguars press conference that he wanted to join a winning situation. The Jags having the first-overall pick is part of that situation.

It has only been a day since Urban was hired to replace Doug Marrone. Meyer is taking on the first professional position of his career–which began in 1985. This is Meyer’s fifth head coaching job. Before the Jaguars, Meyer coached Bowling Green, Utah, Florida and Ohio State.

Meyer is the first head coach to be hired without any prior NFL experience since Chip Kelly in 2013. Kelly is back in college at UCLA after finishing 28-35 with the Eagles and 49ers.

Building a Great and Using the Pieces at His Disposal

Meyer emphasized his standards for bringing in new staff to Jacksonville.

His comments might be signaling that much of the current coaching staff could be heading to the unemployment line. Whether it is because Urban does not see that a current coach fits his standards or because he wants to bring on his guys, something is going to change. On offense, the Jags averaged less than 20 points per game and gave up more than 30 on average. Not a good look offensive coordinator Jay Gruden. Defensive coordinator todd Walsh is already gone.

Along with building a top-tier staff, Meyer needs to build a team and change the culture. ‘Sacksonville’ feels like ages ago now. Since the Jags went 10-6, won the AFC South and reached the AFC Championship Game; they have won just 12 games in three seasons. Last year was their worst year, finishing 1-15 (the won the first game).

The first step should be easy: draft Trevor Lawrence with that first-overall pick and build around him. However, there is Justin Fields from Ohio State–the near consensus second-overall pick. There is a slim chance Urban Meyer goes with his guy. It is move that would lead to shock and possibly scrutiny, simply because Lawrence has been the undisputed, consensus first pick for over a year. That decision will be realized come April.

Harrison is a sports coordinator at ESPN 98.1 FM/850 AM WRUF. He served as a beat writer for Florida Gators football for the 2019 and 2020 seasons. He also contributes to WRUF's Gainesville Sports Center segments and makes appearances on the Clash on Harp on Sports. Harrison has been a content writer for WRUF since January 2019 as well.
@HarrisonSmaj
Previous Believeland in Cleveland
Next UF Men’s Basketball Heads to Starkville