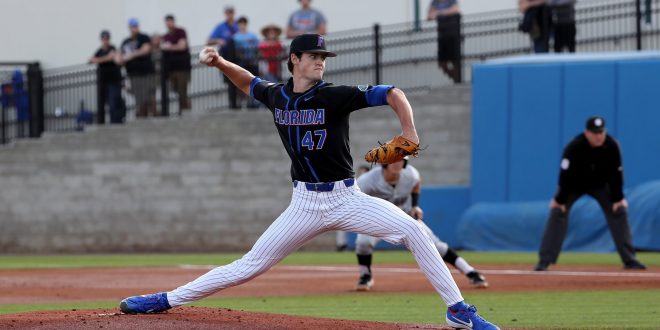 Gators Baseball’s season was cut short last year due to the outbreak of COVID-19. They finished 2020 with a 16-1 record and were the top-ranked baseball team. In 2021, they enter ranked No.1 by Baseball America, making this the fourth outlet to rank the Gators No.1 for the preseason.

One player who enters this season with eyes on him is pitcher Tommy Mace. Mace is a senior from Tampa, Fla., who was drafted in the 12th round out of high school by the Cincinnati Reds in the 2017 MLB draft. However, Mace chose to attend college for the University of Florida.

Mace could have gone pro last season. But he chose to return to the Gators for another year.

Mace said he is glad he chose to stay in school.

“I am happy with my decision because many guys at the next level are not playing right now due to COVID and for them as college players are coming back getting ready to play a season.”

Mace enters the season standing out for this Florida team. He ranked No.38 in Baseball America’s 2021 Major League Baseball draft with 200 other MLB top prospects. Mace Finished the 2020 season throwing a team-high 27.0 innings.

Tommy said it has been a learning process going through the COVID-19 he had to learn things about himself other than baseball stating he learned you have to surround yourself with people that want you to succeed and want the best for you because baseball can get taken away at anytime.

The Gators look to to pick up where they left off from last season and try and win a National Championship. The 2021 season opens on Feb. 19 against Miami.

Previous Santa Fe College Softball to Begin its Season this Weekend
Next No.1 Florida Dominates No. 24 Missouri