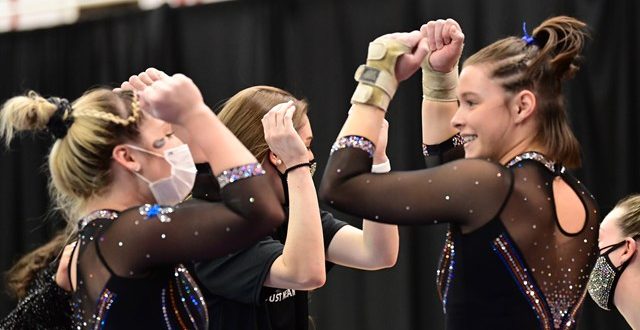 Payton Richards celebrates with Megan Skaggs in Florida's Jan. 22 win at Arkansas. Skaggs claimed the Southeastern Conference Gymnast of the Week honor on Jan. 26 after winning all-around at Arkansas. Photo Provided By: FloridaGators.com

No.1 Florida Dominates No. 24 Missouri

The No. 1 Florida Gators were looking to add another win to their undefeated resume; this time, at the expense of the No. 24 Missouri Tigers. After a few rough outings for All-American junior Trinity Thomas, at least by her standards, she rebounded with an all-around title tonight as the Gators trounced the Tigers, 197.850-194.800.

Besides the matchup between the SEC foes, the night served as the first-ever Pride Night for a UF Athletics team. Before the meet, junior Savannah Schoenherr was shown in a video on the jumbotron. In the video, Schoenherr opened up about her journey to coming out, and her life as a gay woman. As the team raced out of the inflatable gator head, Schoenherr carried a rainbow flag on her back.

“Tonight was a super, super special night,” Schoenherr said. “The love and support that my team, and gator nation, and my family, and just everybody has shown me is just unbelievable. I actually got pretty emotional at the beginning of the meet.”

Florida started the meet off strong, with an emphatic performance on the vault to open the first rotation. Freshman Ellie Lazzari and Schoenherr earned a 9.850, which would have been the top score on Mizzou’s roster. Junior Nya Reed and senior Megan Skaggs scored a 9.875, Thomas reclaimed her throne atop the scores for vault with an event-winning score of 9.925. This win comes after an uncharacteristic sub-9.9 score on the vault last week. When you’re as good as Thomas, the expectations are that high.

“To see her do anything less than a perfect beam routine is definitely rare,” Schoenherr said. “To get near perfection every time is just Trinity. That’s just who she is.”

One would be forgiven if they thought the O’Connell Centers’ roof came off in the second rotation for the Gators. Beginning the second rotation on the beam was sophomore Payton Richards, who scored a strong 9.875 that would not be counted for Florida. That’s just how good this beam performance was. Freshman Gabrielle Gallentine added onto the momentum with a 9.925, and Schoenherr and Thomas matched her score. After she won the all-around title against Arkansas and earning an SEC Gymnast of the Week honor, Skaggs continued her winning ways with a 9.950. This score won the event. After two rotations, Florida led 98.975-97.950.

“She [Skaggs] has taken such an amazing leadership role on this team,” Head Coach Jenny Rowland said. “She’s given so much to this team, and to see her have that success and the team support her is really great to see.”

After putting the pedal to the metal in the second rotation, the Gators gave up no ground in the third.  Richards once again opened the action, and earned a 9.850. Skaggs continued her hot streak, scoring 9.900. This great score would not win the match, however; Thomas would finish the rotation off with a stellar 9.950 that won her the event and gave Florida a commanding lead going into the fourth and final rotation.

“I know people say that she’s struggled the past couple weeks,” Rowland said. “If that’s a struggle, I think any athlete would take that.”

Skaggs recorded a season high on the floor, earning a 9.875. After the first routine for Florida, the team had already clinched the event title. Reed followed that up with a 9.925, repeating her score from last week. Thomas once again came ever-so-close to the evasive ten, scoring a 9.950, and Richards closed out the night with a 9.875. Thomas won the all-around title, and the Gators topped Missouri, 197.850-194.800. By beating the Tigers by 3.050, Florida earned their biggest point-differential of the season.

“I’ve been a little off the past couple weeks, so I knew I needed this to get back on a roll,” Thomas said. “I’m super excited about tonight, and I’m happy to keep it going.”

Next Week for Florida

While the Gators have the week off next Friday, they will be back in action on February 12th. In a trip to Baton Rogue, Florida will face off against No.2 LSU in a colossal matchup between the top two teams in the nation.

“It’s always a good rivalry, and I’ve got some friends at LSU so it’s always good to see them to,” Thomas said. “But obviously, Go Gators.”

Carson Cashion is a second-year student at the University of Florida, and has a major in journalism with a specialization in sports and media. Originally from the Orlando area, Cashion has covered the UF Gymnastics team as well as Oak Hall athletics for ESPN Gainesville.
Previous Gators’ Tommy Mace speaks about upcoming season
Next Gator Volleyball Dominates Ole Miss in Spring Season Opener, Winning Two Matches 3-0