Home / Basketball / Ole Miss Upsets No. 11 Tennessee to Earn its Biggest Win of the Season 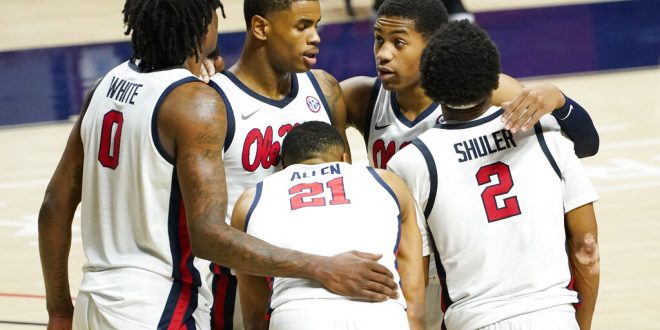 Mississippi players confer during a time out during the second half of an NCAA college basketball game against Tennessee in Oxford, Miss., Tuesday, Feb. 2, 2021. Mississippi won 52-50. (AP Photo/Rogelio V. Solis)

Ole Miss Upsets No. 11 Tennessee to Earn its Biggest Win of the Season

Ole Miss Escapes with the Upset

Ole Miss men’s basketball pulled off the biggest upset of its season in a 52-50 victory over No. 10 Tennessee. The rebels competed in a hard-fought battle and overcame an 11-point second-half deficit to pull off the nail-biter. Tuesday night’s win became the first time the Rebels’ defeated a ranked team in more than two years.

After trailing by 11 points in the second half, the Rebels’ dominated their way to an 11-0 run to take the lead with less than six minutes to go in the games’ final moments.

The Vols began to struggle as the team went 12:27 without making a field goal in the second half. Tennessee failed to get any shots to fall from the floor starting at the 13:09 mark in the game, all the way until 40.9 seconds remained on the game clock.

Missed opportunities cost the Volunteers as players missed one of two free throws with three seconds left that could have tied the score even at 51 apiece. However, with Ole Miss only converting one of their two free throws on the following possession, the Rebels’ allowed Tennessee one final shot at the buzzer.

The #Vols blow a double-digit lead to give Ole Miss it’s first upset over a ranked Tennessee team at home since 2001.

And first time the Rebels knock off a ranked opponent in over 2 years.

UT will take on Kentucky next on the road.

Vols with a really poor second half, blow an 11-point lead. Devontae Shuler was terrific in the second half for the Rebels. Tennessee has now lost three of its last four SEC games.

Both SEC teams take the court again this upcoming Saturday. Ole Miss hopes to advance to a 10-8 overall record with a road win over Auburn at 4 PM. Tennessee looks to bounce back into action with a victory over unranked Kentucky in primetime and hopefully earn their way back into the AP Top 10 teams in the nation.

Angel is a student at the University of Florida. She is a Multimedia Journalist who is currently a Sports Reporter and Writer at ESPN Gainesville. Follow her on Twitter (@angelcwells) and Instagram (@angel_wells). Be sure to follow her NFL Twitter account to stay up to date with the latest NFL news. (@UpToDate1NFL)
@angelcwells
Previous Magic Lose Gordon to Injury, Lose Game Too
Next Buchholz Girls Soccer Advances to District Semifinals