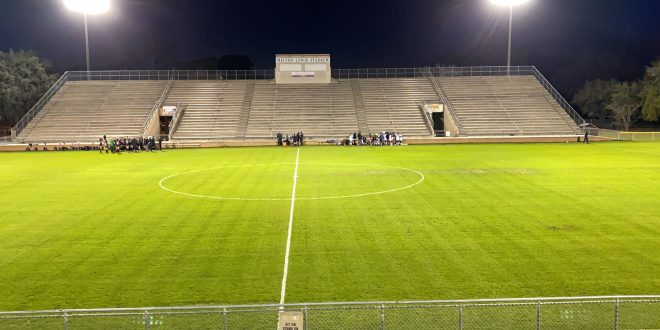 The Buchholz High School girls soccer team has a strong season thus far. Their new coach, Bryan Hantak, who has almost completed his 1st year at Buchholz, has been coaching soccer for 25 years.

The girls have gone through trials with the Covid-19 pandemic, forcing them to take temperatures before each practice in order to stay safe; however, they are one of the only sports programs in the area that has yet to shut down.

Hantak says that during practice, the girls try to take their minds off of what is going on outside of the game of soccer.

As for their upcoming playoffs games, the girls are locked in to compete and come out victorious. The girls played Columbia High School on Tuesday, February 2nd at 7:00 p.m.

This was the 3rd time that the Buchholz girls had seen Columbia this season. In their previous games against Columbia, Buchholz came out victorious with both games being shutouts (7-0), (6-0).

“We can’t focus on the fact that we have beat them twice,” says Coach Bryan Hantak, “My goal is to keep the player’s minds on what we have to do, not what we have done.”

In one of their previous games, against Gainesville High School–a crosstown rival, Coach Hantak expressed how the team missed 4 or 5 easy goals that should’ve been made.

The Buchholz girls soccer team is a possessive team that has been seen to attack with a vengeance.

“They do a good job on offense. We have had about eight or nine shutouts offensively. We have scored about 70 or 80 goals this season. The team just needs to always be there for each other,” explained Coach Hantak.

As for their first playoff game, the trend continued as Buchholz routed Columbia 8-0 in the 6A District 2 Girls’ Soccer Quarterfinals.

The scoring started just moments into the game when Zoe Torres received a pass from Delaney Martin and delivered it into the back of the net. Torres and Buchholz continued to dominate early, as just moments later Torres scored another goal to extend the Buchholz lead to 2-0.

Following the second goal, Buchholz continued to apply heavy pressure; however, they were met with a slew of excellent saves by Columbia goalkeeper, Taiya Driggers.

Resistance to the Buchholz offensive attack was short-lived, as the Bobcats were able to find the back of the net four more times before the end of the first half courtesy of Caitlin Rowe, Rachel Laux, and two from Alicia Cohen. Laux capped the first half with an excellent ball off a pass from the right flank, which managed to sneak by the keeper.

@BuchholzHigh’s Rachel Laux capitalized off of a tremendous pass to take a 6-0 lead right before the half pic.twitter.com/rok43Jm3u9

Buchholz went into the half leading a whopping 6-0.

To open the second half, Columbia looked to quickly attack straight from the kickoff but were immediately turned away by the Buchholz defense, led by team captain Caitlin Rowe.

Mia Driaza scored the first goal of the second half for Buchholz, looping a long-distance shot just over the keeper to extend the Bobcats’ lead to 7-0.

Soon after, Ruby Watson was able to place her header into the back of the net to close out the game for Buchholz, with a mercy rule and a final score of 8-0.

After the game, Delaney Martin (number 8), Caitlin Rowe (number 9), and Ruby Watson (number 22) gave their outlook on the game.

“Scoring early on made our team more intense and gave us an adrenaline rush that helped us start the game,” said the junior forward, Delaney Martin.

“I thought we did well in shutting down their offensive opportunities and distributing the ball well,” said defender Caitlin Rowe, “We controlled the field well by talking to each other, and this game was a good confidence booster for the rest of the playoffs.”

Ruby Watson, a senior midfielder, also gave her opinion on the game. “We had a lot of new girls scoring goals tonight, and once we got a lead in the beginning we were able to get fresh feet in a lot of people who don’t usually have an opportunity to score,” said Watson during a post-game interview.

With the win, Buchholz advances to the 6A District 2 Girls’ Soccer Semifinals, where they will take on Lincoln in Tallahassee on Friday.

Previous Ole Miss Upsets No. 11 Tennessee to Earn its Biggest Win of the Season
Next Santa Fe Survives Late Push By Buchholz