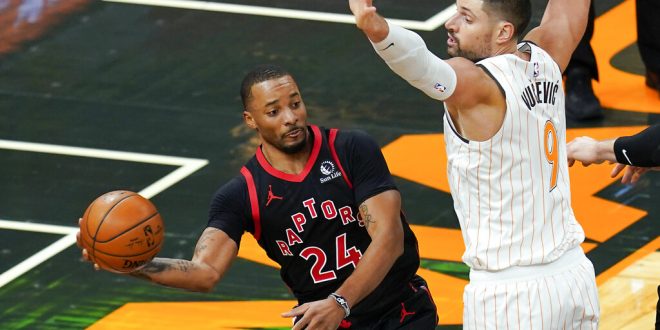 The Orlando Magic have seen the highs and the lows this NBA season. The Magic’s season has been full of injuries and tough losses after starting the season strong.

The Magic lost their fourth straight game Tuesday, the second in a row to the Toronto Raptors after dropping the first game 115-102 and the second 123-108 respectively.

How injuries have derailed the Orlando Magic’s season.

As of February 1, Aaron Gordon is out with a severe left ankle sprain.

With Gordon also out with injury, the Magic are now down to just three players from last year’s group that played 25+ minutes per game. Jonathan Isaac is yet to play this season, still recovering from a torn ACL from last season.

Nikola Vucevic is having a season on par with his All-Star season in 2018-19. He is posting a career-high 22.5 points per game and shooting and making the most 3s in his career. Vucevic would secure the second All-Star appearance of his career if he is selected to the All-Star festivities.

Fourth-year guard Frank Mason has agreed to a two-way contract with the Magic. The Magic become Mason’s third team in his career. This signing comes at a time when the team is lacking guard depth.

This is also a perfect time to get Mason on the two-way deal. Two-way contracts have been adjusted for this season to allow the players to be active for 50 games instead of the normal 45 days. The Magic have played 22 games of the shortened 72 game season, meaning Mason can play for the team for the entire rest of the season.

Jensen Young is a journalism student at the University of Florida. He works as a sports writer for WRUF.com and is the voice of trendings on Wednesday mornings on the WRUF radio station.
@Jensen_Young9
Previous Arkansas Defense Forces 26 Turnovers; Defeats Mississippi State 61-45
Next Ole Miss Upsets No. 11 Tennessee to Earn its Biggest Win of the Season