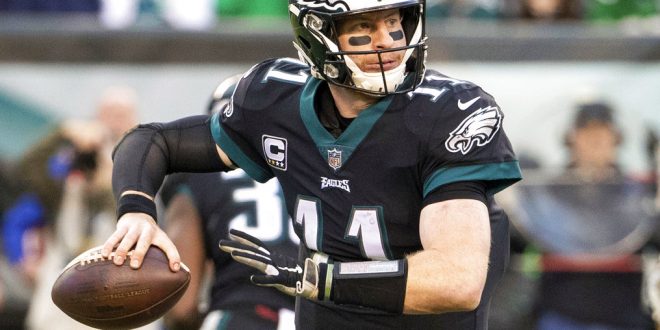 FILE - In this Nov. 25, 2018, file photo, Philadelphia Eagles quarterback Carson Wentz looks to pass during the second half of the NFL football game against the New York Giants in Philadelphia. Wentz put all his skills on display against the Washington Redskins last season. (AP Photo/Chris Szagola, File)

Will Carson Wentz be the Next Quarterback Traded?

The Philadelphia Eagles may be the next team preparing to trade their starting quarterback. With speculation rising as the 2020 NFL season ended, Carson Wentz’s future with the Eagles is questionable.

Wentz is next in line

Multiple teams have expressed some level of interest in Wentz. ESPN’s Adam Schefter explained how it’s a “foregone conclusion that Carson Wentz is going to be traded as early as this week.”

Both the Chicago Bears and the Indianapolis Colts have shown the most interest in Wentz. However, there are other teams waiting to see what the Eagles’ package deal for Wentz would be.

Schefter explained how the Colts would be a logical fit for Wentz because their head coach, Frank Reich, “worked with Carson Wentz and saw the best of Carson Wentz in Philadelphia.” Wentz played for Reich when Reich was the offensive coordinator for the Eagles in 2016 and 2017.

Should the Eagles trade Wentz?

If the the Eagles were to trade Wentz, the franchise would be left with a $34 million dead-cap charge. On top of that, Wentz is due for a $10 million roster bonus if he is listed on the 2021 roster. The argument now is whether the Eagles should try to re-shape Wentz into the player he once was or focus on Jalen Hurts’ potential for the future of the franchise.

Although the Eagles won the Super Bowl back in 2018, the team struggled this past season. They placed fourth in the NFC East, with only four wins, 11 losses and one tie. To get this team back into it’s once “Super Bowl shape,” the franchise should focus who will most help move the team’s future forward. If the right trade deal emerges, Wentz will most likely no longer be a part of the Eagles franchise. Hurts more than likely would take Wentz’s place as the Eagles starting quarterback.

Kaitlyn Wadulack is a third-year journalism student specializing in sports and media at the University of Florida. You can reach Kaitlyn at k.wadulack@ufl.edu
Previous Pro Football Hall of Fame 2021 Class Announced
Next Jets at a Crossroads: To Trade Darnold or Not?