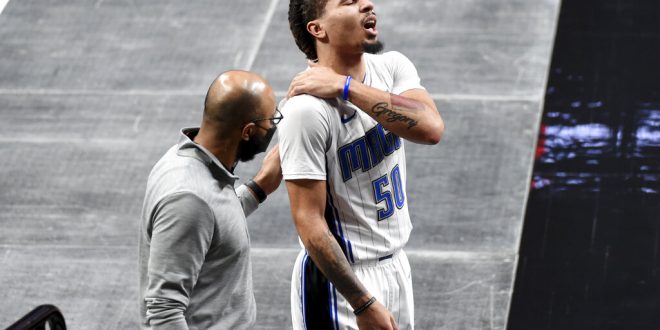 Orlando Magic guard Cole Anthony is escorted off the court during the first half of an NBA basketball game against the Portland Trail Blazers in Portland, Ore., Tuesday, Feb. 9, 2021. (AP Photo/Steve Dykes)

This is the team that started off 4-0 and won six of its first eight games. The Orlando Magic are not that team anymore, as they lose to the Trailblazers 106-97 to fall to 9-16.

This is the third time in six games the Magic failed to crack 100 points in a game.

“Injured” is an Understatement

Forget in the metaphorical sense. Orlando is hurting the literal sense. Let’s look at some of their key players and their status:

But that’s not all.

Evan Fournier was unable to play in the game against Portland, and Cole Anthony left the game due to injury.

You can just hear the sweet sounds of the doctor’s office in your head.

These injuries turned the Magic from a team that started off 4-0 to a team limping to 9-16. It wasn’t any easier in Tuesday night’s game.

First Quarter Does Them In

Despite the injuries, the Magic were competitive for most of the game–specifically the final three quarters. That first quarter, however, saw them outscored 31-19. Orlando couldn’t recover even when they outscored Portland in the second quarter, 24-19, and in the fourth quarter, 24-22.

Nikola Vucevic gave it his all, scoring a quarter of the team’s total points (27), along with 15 rebounds and four assists. Terrance Ross tallied 22 points off the bench and collected four rebounds and an assist to go with it.

The Magic can clearly still make it somewhat of a game. But without their key player, it’s going to continue to be a rough time.

Harrison is a sports coordinator at ESPN 98.1 FM/850 AM WRUF. He served as a beat writer for Florida Gators football for the 2019 and 2020 seasons. He also contributes to WRUF's Gainesville Sports Center segments and makes appearances on the Clash on Harp on Sports. Harrison has been a content writer for WRUF since January 2019 as well.
@HarrisonSmaj
Previous SEC Basketball: Auburn Tigers Face Vanderbilt Commodores
Next Gainesville’s Senior Night Ends in Close Loss