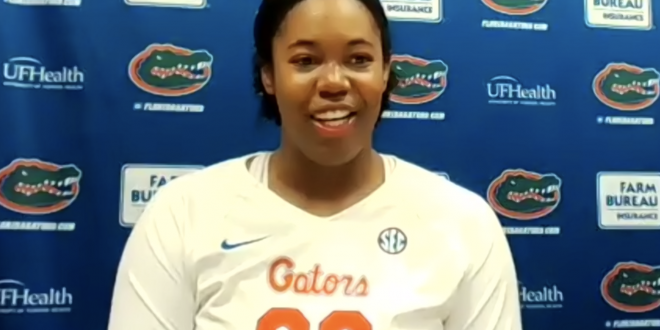 The Gator volleyball team swept the LSU Tigers in Wednesday night’s match up in Gainesville and it was a good night for a lot of Gator players.

The first set saw the Gators get out to an early 9-4 lead over the Tigers. Not long after, LSU brought it to a one point deficit at 10-9. Both teams stayed locked in a tight set until LSU took their first lead at 25-24. Florida came back with three straight points to win the first set 27-25.  In that first set, LSU’s Taylor Bannister had seven kills and for the Gators, T’ara Ceasar had five kills and Lauren Dooley had four kills and a perfect hitting percentage. Marlie Monserez had 15 assists, and Holly Carlton had two aces.

The third set was about as back and forth as it gets. Neither team managed more than a two point lead until Florida reached 21-18. LSU climbed back to tie it at 24-24 and force extra points. The Gators pulled off the sweep, finishing the third set 28-26.

T’ara Ceasar had eight kills in the final set, Thayer Hall had five, and Holly Carlton added four. Monserez added another 17 assists to her total and finished the match with 39 assists.

Freshman Elli McKissock finished Wednesday night’s match with 24 digs, and that now ranks third all time for Florida volleyball players for digs in a three-set match.

Gators coach Mary Wise had this to say of McKissock.

“She played terrific all match. She answered LSU’s challenge.”

She further added that she expects McKissock to continue to improve with the more games she plays. When asked about the story of the night, Wise said there were lots of great stories but that McKissock is “the real one.”

The Gators will face LSU again on Thursday night in Gainesville.

Jensen Young is a journalism student at the University of Florida. He works as a sports writer for WRUF.com and is the voice of trendings on Wednesday mornings on the WRUF radio station.
@Jensen_Young9
Previous No. 16 Tennessee to host unranked Bulldogs in SEC matchup
Next No.1 Gators Face No. 2 Tigers In Huge Gymnastics Meet