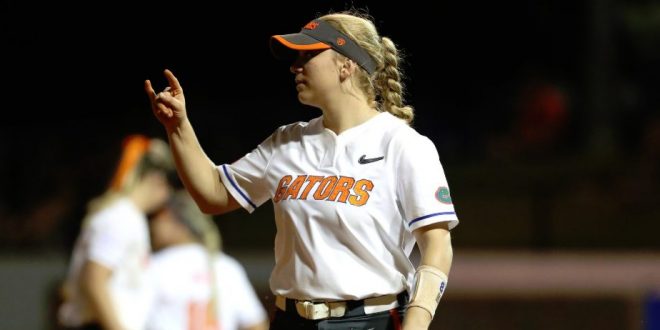 The Gators scheduled three games this past weekend, but Sunday’s game against the USF Bulls was postponed due to inclement weather.

In Saturday’s doubleheader, Florida showed why they entered the season as the No. 6 team in the country.

Despite a shaky start in the season-opening game, Florida’s bats came alive in the top of the seventh inning to open up a 6-3 lead. In the second game of the doubleheader, the Gators showed no doubts. Dominant pitching from junior Elizabeth Hightower and success up and down the lineup in the box put the game to bed early. In the end, the Gators walked out 15-0 winners.

The key for the Gators so far has been Charla Echols. The junior went six-for-six in the batter’s box and hit for the cycle over the two games. Echols earned SEC Player of the Week honors for her performance in Tampa. She is certainly living up to the Preseason All-SEC 3B selection she earned in the offseason, although it is early in the season.

However, it should also be noted that the Gators effectively shut down USF for much of the first game and all of the second game. Natalie Lugo and Katie Chronister bounced back from allowing three runs to stifle any scoring opportunities for USF. Hightower pitched four innings in the second game and allowed one hit before Rylee Trlicek replaced the starter. In total, the Gators pitching and defense allowed three runs on five hits and one error.

The close first game signals that there is work to be done as the Gators Softball team welcomes an in-state foe for the home opener.

The Dolphins, now 2-0 after wins against Boston College from this past weekend, have pitchers that have the potential to limit the Gators’ bats.

Alyssa Bilodeau threw a no-hitter against Boston College in their opening-day matchup. The redshirt senior led the ASUN Conference in strikeouts in 2020 and had six games where she reached double-digit strikeouts out of the 12 games she started. That includes a 17-strikeout performance against Furman last season. At the end of the weekend, Bilodeau pitched 9.0 innings and amassed 16 strikeouts, two hits and four walks. To boot, Bilodeau earned ASUN Player of the Week.

If you ever wanted to see an @alyssa_bilodeau pitch in slo-mo well here you go 😄 pic.twitter.com/bo2UU4rmiI

Bilodeau faces the task of shutting down the Gators offense that put up 21 points in two games. The Gators possess a wealth of talent throughout their batting order. In fact, six Gators batters earned extra-base hits over the two games. Echols herself managed three extra-base hits.

Jacksonville is also a team that can threaten throughout their lineup, but not quite at the same magnitude as Florida. Four Dolphins managed doubles, but nothing more than that. If the Gators can limit their errors and keep Bilodeau under pressure, their talent on both sides of the ball should prevail.

First pitch of this midweek matchup is set for 6 p.m. on Wednesday, Feb. 17.

Originally from Seminole in the Tampa Bay area, Kyle is a contributor for ESPN Gainesville as well as local NPR and PBS affiliate WUFT. Kyle wants to get into sports with a lofty dream of being a sports broadcaster. He was raised playing soccer and baseball while watching hockey and football, so the knowledge about various sports is fairly extensive.
@KyleFanslerUF
Previous McCann Set to Begin Season with the Mets
Next Milwaukee drops four straight despite best attempt from Antetokounmpo