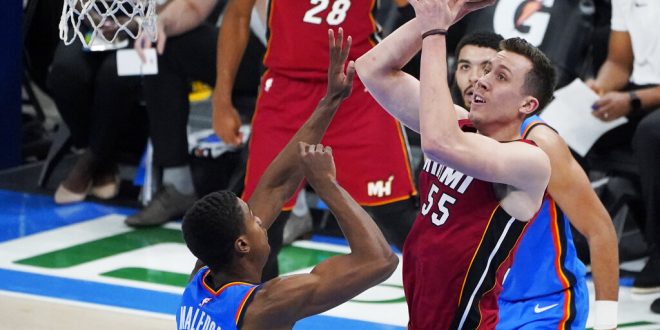 It’s been a long seven games on the road for the Miami Heat, but they may have finally found their rhythm.

The Heat’s west coast road trip could have been disastrous, especially after dropping three in a row. Miami did not quit though and fought harder, ending the trip on a three-game win streak. The trip was rounded out with a 108-94 win over the Oklahoma City Thunder.

Jimmy Butler could easily be Miami’s biggest asset or their downfall. Butler’s gameplay is always top-notch, however, the rest of the team has a problem with becoming complacent. Butler is needed in the lineup for this team to be their best, but the rest of the team needs to give max effort too.

And last night they did. Duncan Robinson had one of his best shooting performances as of late, scoring 22 points which included six three-pointers. Kendrick Nunn added 20 points and nine assists with Bam Adebayo right behind with 19 points and 13 rebounds.

Butler did put in his fair share of points last night with 15 and nine assists, but he was able to get a much-needed break on the bench for the final 12 minutes.

The Heat really started the 4th quarter on a 15-0 run without Jimmy Butler on the floor pic.twitter.com/EiJKRP6vdL

Last night though, the Heat were not as worried about their starting lineup, but more their reserves. Tyler Herro was out due to a right hip injury he suffered against the Lakers. With Goran Dragic and Avery Bradley out too, who would step up as sixth man for the Heat?

It turns out, a few players. Max Straus was called upon first and he stepped up big, adding 11 to Miami’s total. Precious Achiuwa was next and then Andre Iguodala. Achiuwa picked up two points in just nine minutes of play.

Iguodala’s impressive performance came more on the defensive side of the ball though. He picked up five rebounds and two blocks in just 23 minutes of play.

The Heat will return home for the first time since February 9th to take on the Toronto Raptors. The Raptors are coming in on a four-game winning streak of their own. The winner of this game will decide who takes the season series which is currently tied at 1-1. Tipoff is set for 8 p.m.