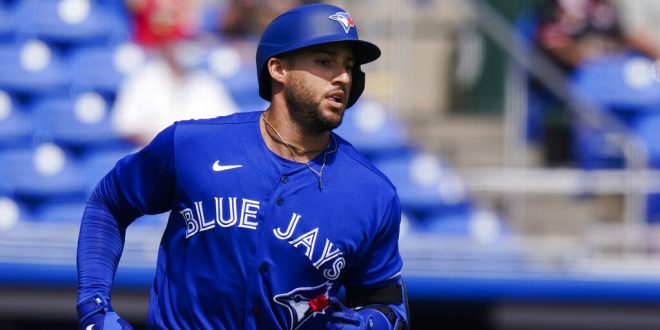 Toronto Blue Jays' George Springer runs to first base for a single during the first inning of a spring baseball game against the Philadelphia Phillies on Tuesday, March 2, 2021, in Dunedin, Fla. The Blue Jays won 4-2. (AP Photo/Frank Franklin II)

George Springer spent the first seven seasons of his MLB career with the Houston Astros, went to the playoffs five times and won a World Series. But this offseason, he inked a six-year, $150 million deal with the Toronto Blue Jays in free agency. Now, he gets a fresh opportunity with a new team.

Springer made his debut Tuesday against Philadelphia. He batted leadoff for the Blue Jays in their 4-2 win over the Phillies.

Springer said he gets excited for the first live at-bat of the spring every year. And in his first spring training at-bat with his new squad, he found the outfield grass. Springer drilled the second pitch he saw right back up the middle for a single.

Since Springer spent so long with Houston, he said it was a little weird at first to put on a new jersey. But he likes the blue, is over the weirdness and is having fun with his new team.

Fitting Into a New Squad

In addition to a new jersey, Springer gained a whole new set of teammates when he went from the Astros to the Blue Jays. He will look to lead a young core of players that features the likes of Bo Bichette, Vladimir Guerrero Jr. and Cavan Biggio.

He said he feels very welcomed because of the guys in the clubhouse and wants to earn their respect.

“I get to the park every day excited just to kind of understand how the guys work,” Springer said. “How the clubhouse vibe is each and every day, starting to understand what time guys are getting to the ballpark every day, the stuff that they like to do.”