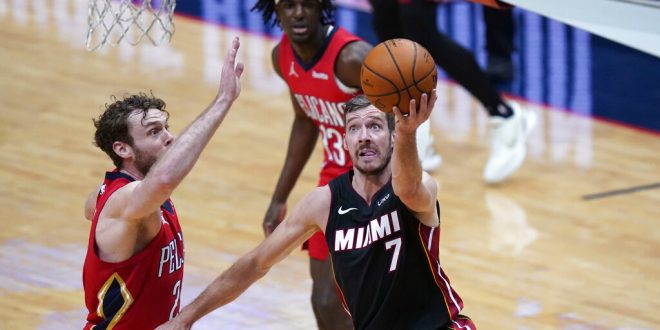 The Miami Heat head into the All-Star break after picking up a 103-93 victory over the New Orleans Pelicans on Thursday night.

Bring on the 2nd half of the SZN pic.twitter.com/SGupaTr9yr

Miami picked up the win in large part because of the performance put on by forward Jimmy Butler. Butler racked up 29 points on 10 of 14 shooting from the court. Additionally, he also tallied nine assists to go along with his 20-point showing.

Another successful night at the office for @JimmyButler pic.twitter.com/ZYE8b1I1xv

Butler also had a late step-back three-pointer that came during a Heat 11-2 run with a little under three minutes remaining in the game. The bucket helped increase Miami’s lead to 11 and ultimately hold off a scrappy Pelicans squad.

While Butler lead the way in scoring for the Heat, Miami also got big performances from a few other players, as well. Forward Kelly Olynyk finished just shy of a triple-double and managed to score 18 points on 7 of 8 shooting from the field.

Furthermore, the Heat also got contributions from the bench, as point guard Goran Dragic and forward Andre Iguodala combined for 23 points and six rebounds to help in the scoring efforts.

As a team, Miami shot nearly 50 percent from the floor and racked up a total of 10 three-pointers.

Despite the performances from multiple Heat players, the Pelicans still managed to keep the game close down to the final minutes. New Orleans was also without star forward Zion Williamson, who is nursing a toe injury.

The Pelicans had six players in double-figures on Thursday night, including forward Brandon Ingram, who lead the team with 17 points and nine assists. In addition, New Orleans got a combined 23 points off the bench from point guard Kira Lewis Jr. and guard Nickeil Alexander-Walker.

In all, the Pelicans shot roughly 40 percent from the field and managed to put up 11 three-pointers along with 48 rebounds.

As mentioned already, both squads now head into the All-Star break after concluding the first half of their schedules. Miami will not be back in action until March 11. when it hosts the Orlando Magic at 8 p.m.

New Orleans will also not see the hardwood again until March 11. when it welcomes the Minnesota Timberwolves. Tip-off for that game is set for 8 p.m.

Previous No.1 Gators Close Out Regular Season Against No.6 Alabama
Next Florida Gators Volleyball Back at Home to Battle with Arkansas Razorbacks