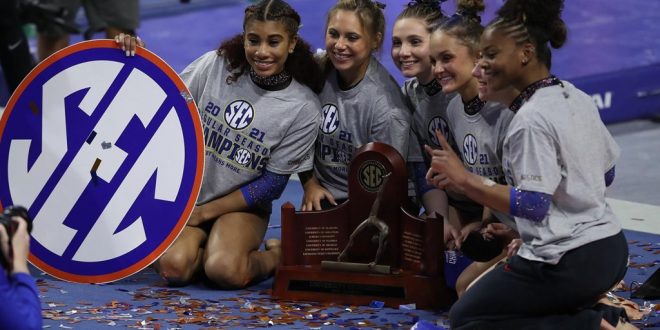 The SEC announced its award recipients for the 2021 gymnastics season on March 24. After securing a perfect regular season and the top overall seed at the Athens Regional, the list of winners would surely include some Gators. Four Florida Gators were named to the All-SEC Team, and Head Coach Jenny Rowland earned her second-consecutive SEC Coach of the Year Award.

Rowland Wins Coach of the Year

With sky-high expectations, injuries and COVID-19 protocols, Rowland has had plenty of obstacles to overcome with her team this year. Despite these, the former USA National Team member kept her team focused on an elite standard of consistency. “Keeping things normal” has been Rowland’s mantra all season long, and it has yielded undeniable results; the Gators claimed their third-consecutive SEC regular-season title on the back of back-to-back undefeated regular seasons.

“It is truly an honor, and something that I really don’t have the words to describe right now,” Rowland said. “This award just really encompasses the entire team, and all the work that we have done together to accomplish what this team has accomplished.”

Besides its’ coach, the team also received four spots on the All-SEC Team, which awards the top gymnasts from the conference. Seniors Alyssa Baumann, Megan Skaggs, junior Leah Clapper, and freshman Ellie Lazzari all earned spots on the team.

Baumann, a five-time All-American, provided veteran leadership on a team that featured plenty of underclassmen. She was spotlighted in the “Link to Pink” meet against Kentucky, when the gymnast out of Dallas, Texas, made her return to the bars. On her first collegiate appearance on the uneven bars after suffering an elbow injury on them five years prior, Baumann earned a 9.925. This emotional performance from Baumann led to an all-around title at the meet; her score of 39.650 set a new school record for an all-around debut.

“It’s a big honor,” Baumann said. “The SEC is by far the hardest conference, so anytime that you get an honor like that it’s a big deal, so I’m proud of that.”

Skaggs, a senior from Marietta, Georgia, has been a large contributor to the team all year. She has competed at every meet this season, and her consistency is reflected by her spot as the 12th in the nation for all-around gymnasts. On January 22, Skaggs clinched an all-around title for her performance at Arkansas. Her 39.500 score, featuring a 9.950 on the beam, earned Skaggs the title of SEC Gymnast of the Week.

“That is an incredible honor,” Skaggs. “The SEC is such a strong conference, so I am honored to be apart of the SEC and to be named to that is really special.”

Besides a spot on the All-SEC team, Clapper was also the recipient of the “SEC Scholar-Athlete of the Year” award. Sporting a 3.98 GPA, the gymnast from Ann Arbor, Michigan, is perfect for the title. In competition, Clapper has provided elite skill for Florida on the beam; she earned a 9.925 at the SEC Championship on the beam, placing her 5th amongst the competition. On February 19, at the meet against Kentucky, Clapper brought the O’Connell Center faithful to their feet; she became the ninth Gator gymnast to earn a perfect 10.000 score on the beam.

“I didn’t even know that it was really a thing,” Clapper said. “That is such an amazing honor, and I am so flattered to have received it. It feels really good.” 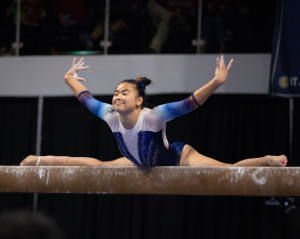 Lazzari has emerged as an all-around gymnast for Florida this year, and her development has been recognized by the SEC. The freshman from Wheaton, Illinois, was one of six freshmen to be named to both the All-Freshman team and the All-SEC team; her 9.950 on the beam at the SEC Championship earned Lazzari a share of the beam title. Furthermore, her all-around score of 39.475 at the Championship ranked first among freshmen.

“I know that this team has my back, and I will always have theirs,” Lazzari said. “I wanted to pick up the momentum and get the fire going, so that’s what I did.”

After a disappointing third-place finish at the SEC Championship, the Florida Gators will travel t0 Athens, Georgia for NCAA Regionals. There, the team will compete for one of two spots to send it to the National Championship in Ft. Worth, Texas.

Carson Cashion is a second-year student at the University of Florida, and has a major in journalism with a specialization in sports and media. Originally from the Orlando area, Cashion has covered the UF Gymnastics team as well as Oak Hall athletics for ESPN Gainesville.
Previous Florida Soccer Knocks Off Undefeated North Florida
Next Gator Volleyball Smashes Aggies