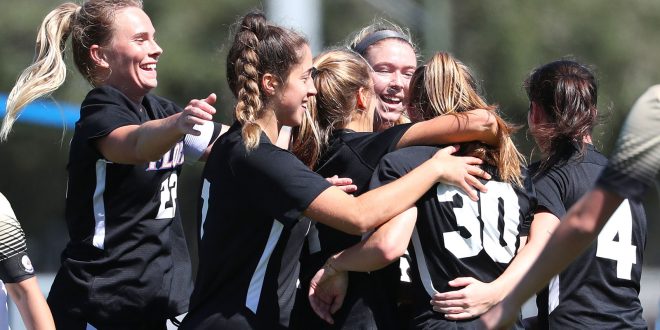 This was the Ospreys’ first loss of the season and their first non-conference match. This was also the first time UF and UNF faced off in soccer.

Both these teams matched up well together as UNF has a solid attack that was getting great opportunities early in the match. The Ospreys were not intimidated by the Gators and played their style. Florida’s defense has been getting progressively better this season and it showed when UNF’s attack was stalled later in the game.

The second half is where Florida began to flex their muscles. They controlled the possession and got great looks, which led to great goals.

When Beata Olsson had opportunities to score, she happily took advantage of them as she was very appreciative of her teammates who set her up, brilliantly.

Déjà vu from last match against LSU. Senior Parker Roberts, finds her senior teammate, Madison Alexander, who high kicks the pass forward to Beata Olsson for the goal and the lead in the 74th minute.

But the Gators weren’t done yet and neither was Olsson.

Another goal for Beata Olsson!

The second goal and dagger of the match came ten minutes after the first. Maddy Rhodes crosses the ball beautifully to Madison Alexander who redirects the pass right to the cutting Olsson. A spectacular goal by the Gators.

Credit to Mercedes Sapp, the UNF goalkeeper who is the daughter of former NFL defensive tackle, Warren Sapp. Mercedes is making a name for herself in Jacksonville. The Missouri transfer wanted to prove she belonged in the conference tonight and she did just that. Sapp is athletic, great reflexes, quick feet, and has fantastic hands. Up until the two late goals, she played very well and was looking for her fourth shutout of the season.

Instead, Susi Espinoza grabbed her second clean sheet of the season and had a great match herself with two saves, controlling any attacks by North Florida.

The Gators will turn around and play another match on Sunday against Georgia in Atlanta at 1 p.m.