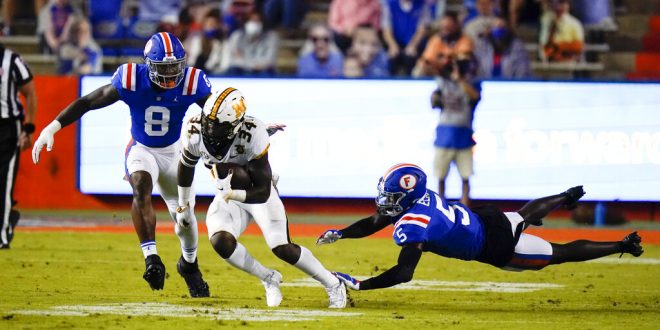 Missouri running back Larry Rountree III (34) tries to get past Florida linebacker Khris Bogle (8) and defensive back Kaiir Elam (5) during the first half of an NCAA college football game Saturday, Oct. 31, 2020, in Gainesville, Fla. (AP Photo/John Raoux)

It’s safe to say the Gator defense struggled mightily in 2020.

2021 presents an opportunity for Mullen and defensive coordinator Todd Grantham, who has received the brunt of the fan base criticism. The Gators have a chance to bounce back defensively and improve as a unit. With seven returning starters, Grantham will rely on experience to propel his unit back to national prominence.

If Florida is to improve defensively in 2021, it begins with the defensive line. Last season, the unit had trouble stopping the run game. Two starters return in edge rushers Zachary Carter and Brenton Cox Jr. The returning starters each posted 9.5 tackles for loss with five and four sacks respectively.  Mullen believes Cox and Carter’s experience will propel the defensive line.

However, for this unit to truly improve in 2021 depth must play a factor. This was addressed in the offseason, as Grantham and defensive line coach David Turner took to the transfer portal in hopes of adding depth. Former Penn State defensive tackle Antonio Shelton and Auburn transfer Daquon Newkirk look to bolster depth along the line. Also, redshirt sophomore Mohamoud Diabate, former five star Gervon Dexter, Andrew Chatfield Jr. and Derek Wingo will provide depth off the edge.

With depth coming off the edge, the defensive line looks to be a unit that will vastly improve for Florida in 2021. Look for Gervon Dexter to make an impact. The second-year player possesses great length, which allows him overpower linemen using his athletic frame. If Dexter can fill the void left by Jon Greenard two years ago, Florida would take a huge step forward defensively.

Mullen has stated he is most comfortable with his linebacking group. Led by returning starters Ventrell Miller and Amari Burney, the Gators are returning 82 tackles combined from 2020. Yet, the secondary remains a question mark. Florida returns two starters in the secondary, All-SEC cornerback Kaiir Elam and versatile nickel Trey Dean. For a team that once anointed themselves defensive back university, they took a massive step back in 2020.

Mullen will rely on Elam to lead this unit in 2021. Yet, the Gators lose all starting safety’s from a year ago and starting cornerback Marco Wilson. Safety Rashad Torrence, cornerback Jaydon Hill and five star early enrollee Jason Marshall will have to step up if this unit is to improve in 2021. Ranking No. 100 in pass defense last season, the Gator’s will need their young secondary players to step in quickly.

Torrence has a big opportunity this season. The 6’0″ 195 pound safety started during the 55-20 blowout loss to Oklahoma in the Cotton Bowl. While that game was a porous showing defensively, the safety looks to build off of his experience and step in as the teams strong safety.

Through spring practices, it is clear the defense has taken a step forward. Mullen states the defense has actually won most of the scrimmages, a reverse from last season. With a full spring camp, Florida can only improve defensively. In 2020, they did not tackle until opening day against Ole Miss. Additionally, the defense now has battle-tested experience, which Mullen hopes will propel the unit.

Now, an improvement isn’t saying this will be the Gators defense of old. Florida could still struggle schematically against high tempo run-pass option offenses such as Alabama. But then again almost all defenses struggle with offensive units like that.

In short, the Gators defense should take a step forward in 2021. It may not be the leap fans hope for, but improvements will be and have been made through spring practices. For now, it’s all speculation. With no spring game, fans will have to wait until September 4 against FAU to see truly what this unit will look like in 2021.