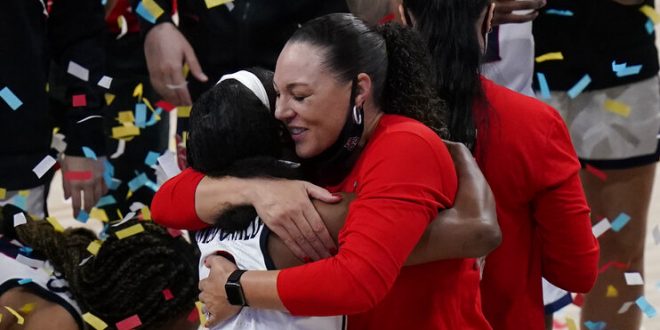 Arizona head coach Adia Barnes hugs guard Aari McDonald (2) as they celebrate their win over Indiana in a college basketball game in the Elite Eight round of the women's NCAA tournament at the Alamodome in San Antonio, Monday, March 29, 2021. (AP Photo/Eric Gay)

The Arizona Wildcats Women’s Basketball team punched its ticket to the Final Four Monday night in a historic win over Indiana.

On the back of senior guard Aari McDonald, the Wildcats were able to shut down the Hoosiers 66-53 .

Playing 38 of 40 minutes, McDonald was crucial helping the Wildcats past the Hoosiers. McDonald shot 60 percent from the field and accounted for half of the Wildcat’s points, scoring 33.

McDonald also lead the game in rebounds, with 11.

Indiana was unable to stay with the Cats, shooting 20-55 from the field. Furthermore, the Hoosiers couldn’t connect from beyond the arc, missing all nine three-point attempts.

Sophomore Mackenzie Holmes lead the Hoosiers with 20 points in her 36 minutes on the court.

With Arizona’s win, head coach Adia Barnes made program history – again. After the victory over Indiana, Barnes is only the second former WNBA player to coach a team to the Final Four of the Women’s tournament.

Barnes is no stranger to historic seasons. In addition, she is already third in wins for the program’s history and is the fastest Arizona coach to reach 75 wins.

The next opponent the Wildcats face is top seeded UConn. On the other side of the bracket, the winner of Stanford and Louisville will play the winner of South Carolina and Texas.

Matthew Bell is a senior at the University of Florida. He completed his associates degree at State College of Florida in Bradenton and transferred to UF in 2019. His favorite sports are American football and baseball.
@@write_matthew
Previous Baylor Bears Head To The Final Four For The First Time Since 1950
Next Gators Baseball Game Against Mercer Canceled 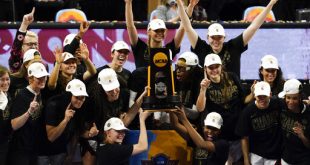 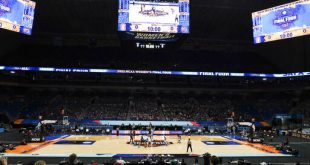