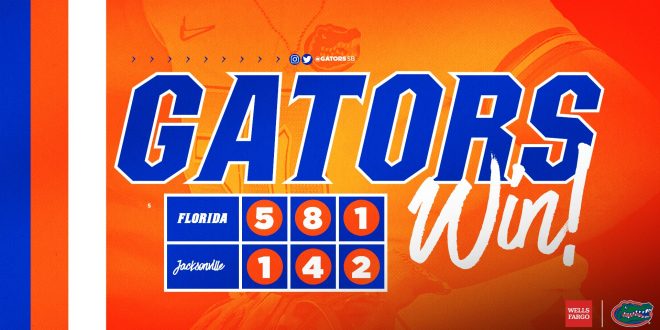 Hannah Adams went 3-for-3 to propel the fifth-ranked Gator softball team to victory over Jacksonville 5-1 Wednesday night. Adams continued her scorching hot hitting spree, hitting her fifth home run of the year in the fifth inning and extending her hitting streak to 13 games.

Offense Stays Patient at the Plate

The Gators offense walked 10 times in the match up against the Dolphins. Dolphins starting pitcher Skylar Whittey struggled to find the strike zone in the first inning, walking seven Gators. The team was able to take advantage of the walks, taking the lead in the top of the first inning 1-0.

After walking two more Gators in the second inning and giving up two base hits, Whittey was pulled and the Dolphins went to their bullpen. However, the Gators couldn’t get any more runs in the inning, stranding three runners on base.

After a scoreless third inning, Adams extended her hitting streak, knocking a leadoff single to right field. Advancing to third on the next two plays, Adams came home to score after Julia Cottrill drilled a run scoring single to left field, extending the Gator lead to 3-0.

T4 | Cottrill plates Adams with an RBI single through the left side to extend the lead! #GoGators

The Gators pulled away in the top of the fifth inning, with Adams hitting an opposite-field two-run home run to push the Gator lead to 5-0.

Lugo Dominates on the Mound

Natalie Lugo started in the circle for the Gators. Dominating the Dolphins through four innings, she ran into some trouble in the bottom of the fifth inning. However, Lugo only allowed one Dolphin runner to cross the plate, keeping the game at a four-run difference.

Lugo would go on to pitch in the sixth inning, shutting down the Dolphins easily. Pitching six innings, only giving up four hits, and striking out five Dolphins, Lugo allowed the Gators to cruise to a four-run win.

The Gators will travel to Athens, Georgia, to take on the 20th ranked Georgia Bulldogs in a three games series starting Saturday. First pitch of Saturday’s game is set to begin at 8 pm, with the game being televised on ESPN. 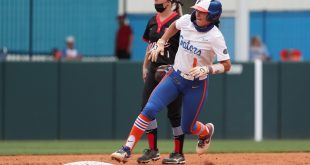 The fourth-ranked Gators softball team faces their biggest test of the year this weekend, traveling …